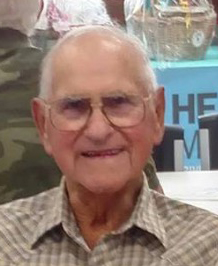 Ed loved gardening, hunting, fishing, playing cards and spending time with family and friends. He always had a song in his heart and could be heard singing even in the toughest times. He will be sadly missed.

Funeral services will be held on Wednesday, March 27, at 11 am at St. Francis and St. Mary Parish in Brussels. Entombment will be in the Shrine of the Good Shepherd Mausoleum. Friends may call at the Forbes Funeral Home on Tuesday, March 26, 3-7 pm; and at the church on Wednesday, March 27, from 10 am until the time of the service. A prayer service will be conducted at 6:30 pm on March 26 at the funeral home.

The family would like to extend a special thank-you to the excellent staff at Aurora Bay Care Medical Center, to the Brussels-Union-Gardner first responders and to Dennis and Pat Buhr and Delores Krueger, who were there for the family.