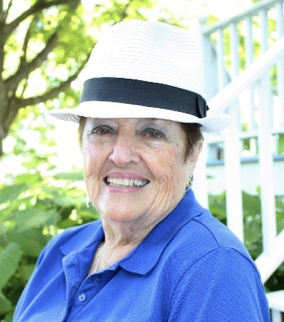 Elaine is survived by her daughters, Lanie (John) Dustin and Susan (Rich) Kolbe; her son, Jon (Kendra) Hanrath; and her daughter-in-law, Kathy Hanrath.  She also has 11 grandchildren and 9 great-grandchildren who loved her dearly.

Elaine was born in 1925 in Michigamme, MI, and attended school in Escanaba, MI.  Her family later moved to Kenosha, WI, where she met and married Frank Hanrath in 1944.  They lived in several Wisconsin towns during their marriage, including a 20-year stay in Marshfield before retiring in Baileys Harbor in 1985.  After Frank passed away, Elaine married Bill Haring in 2008.  They spent the last years of their lives in Fairhope, AL, near Bill’s family.

Elaine loved God and her family most of all.  She also enjoyed painting, rosemaling, sewing, and singing in church.  Friends and relatives will always remember her beaming smile, quick wit, and riotous laughter.  It was always a treat to receive one of Elaine’s hand-written letters, which she wrote almost daily, even during her last year of life.

Elaine’s dream was to have a home in Door County where she could see the sunrise.  Frank and she lived that dream together for almost 20 years.  According to her wishes, her ashes will be placed next to his in Baileys Harbor.  The plaque on Elaine’s urn reads, “Now the mystery begins.”