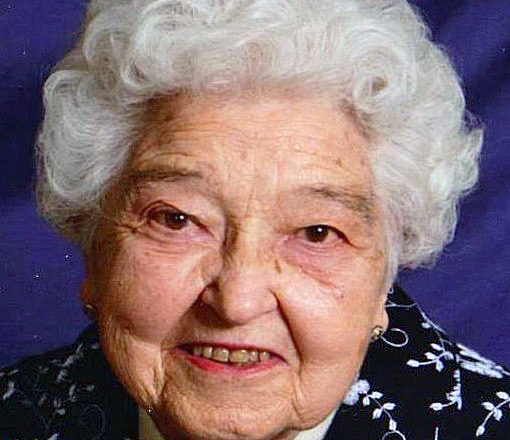 Elaine joined her husband, other relatives and friends in a heavenly reunion on August 30, 2016, while Pastor Sauer (St. Peter’s Ev. Lutheran Church – Sturgeon Bay) sang to her the hymn, “Abide with Me.” Following a short hospitalization for a chronic heart condition, she was being cared for at Ministry Door County Skilled Nursing Facility. The last several months of her life were spent with her son Paul and his wife, Judy at their home in rural Sturgeon Bay.

Elaine was born February 3, 1923, to Harry and Mary (Mesick) Heinritz, the youngest of four children. She was baptized into the Christian faith on March 11, 1923 in her parents’ home.

Elaine’s parents died when she was very young. For several years she lived with loving relatives until 1931, when she was adopted by devout Christians, Paul and Rachel (Doughty) Sellin. On June 27, 1937, she was confirmed in the Christian faith at Mt. Olive Ev. Lutheran Church in Appleton, where she remained a lifelong member.

Elaine served her Lord: teaching Sunday School and being active in Young People’s Society, (there she met her future husband, Harold Schumacher). They were married at Mt. Olive on June 14, 1947. The marriage was blessed with one son, Paul. They continued to serve in many organizations at Mt. Olive: teaching Sunday School, working with the youth group and on numerous committees and the Ladies Aid.

She was a long time loving caregiver for her parents and then for her dear husband until his death in 1990.

She is survived by her son Paul and daughter-in-law Judy, a sister-in-law, Marie Heinritz, Appleton; many nieces and nephews and grand-nieces and grand-nephews. And her special friend and “grand-dog,” Auggie the Airedale Terrier. Elaine was preceded in death by both sets of parents and her siblings.

Outside of church, she was a volunteer for numerous years at Hearthstone Historical House, the Visually Impaired People group, AMC Auxiliary, and various groups that supported Fox Valley Lutheran High School.