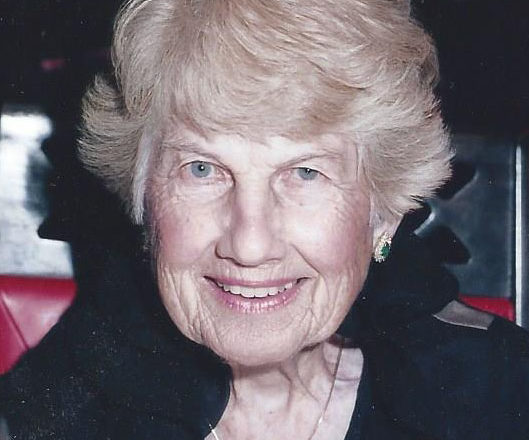 Eleanor was born on May 20, 1915, in Milwaukee, WI to John and Mary Gurda who owned a prominent hardware store at 32nd and Lincoln .They opened the hardware store at the time of Eleanor’s arrival, 101 years ago. She had two brothers, both deceased, Art (children John, Paul, and Mike )and George(children, Bob ,Mary and Jennie ) Eleanor’s  sister Rosemarie, is currently living in  Wauwatosa  with her husband Alvin Stack . Anita, George’s wife, lives in Madison. Eleanor was married in 1939 to Raymond Pesch, who deceased in 1998. They had three children Alan, Marianne and Frederick with wife Sherry, all living in Florida, Madison and Sturgeon Bay respectively. Three grandchildren Ryan and Shannon Pesch and Christina Ewig survive.  Christina has two great grandchildren.

Eleanor and Ray lived in Milwaukee for almost 20 years thru 1957. They last lived on Anthony Drive in The Town of Greenfield. The family participated in Camp Charles Allis on Lake Beulah, she was President of the PTA at the Walter Allen School, now paved over by the expressway. She supported her children’s active participation in the Library and Milwaukee Museums as leader of youth programs at those learning centers. She baptized and had her children become communicants at St. Stanislaus, now overlooking the expressway and later St. Barbra’s.   Eleanor was an active participant in life for all of her 101 years.  She early on felt it important for women to work outside the home, even if only part time, and managed to take a turn at the post office during Christmas rush.  Something unthought-of in the early 1950’s, except during the war.

When they moved to Sturgeon Bay, Ray worked for the Roen Steamship and Salvage companies’.  The Asher’s were close friends and they also lived and raised their family on the Bay Shore.  Eleanor learned to drive during this move from the big city life to a rural environment, she was 37.  It was the beginning of her expanded life style similar to what many women of that time experienced in the 50’s.  She was president of the Garden Club of Sturgeon Bay, an accredited, sought after area show judge and planned and maintained extensive gardens of her own.  Her ashes will be scattered in Sherry Pesch’s present garden at her request.  Eleanor was a member of several golf leagues and from humble beginnings won an extensive number of awards and trophies.  She was an accomplished culinary talent with a collection of cook book and recipes that filled the shelves, and she cooked as well, passing on her talent to some of her children.  The Sturgeon Bay Yacht Club factored in the family sailing interests as did various charity functions.

Eleanor was a member of the St. Joseph’s parish in Sturgeon Bay and raised her family in the rational practice of the church, but not necessarily on time for Mass, much to our chagrin as we marched down the aisle after most were seated. Her timeliness, or lack of, was a hallmark of her life that everyone learned to live with, it may be why she became 101.

Eleanor and Ray bought into the idea of Florida winters, owning a condo in Coco Beach at Four Seasons from the early 1970’s thru today.  Rays brother Ralph, was a well-known early Space center employee for the Corps and they shared a winter of fishing and golf.  Eleanor was an active golfer, woman’s club member and persistent shopper, but not necessarily always a buyer.  She was past president of the Hazel Peterson fan club and coordinated many Four Season outings.

Perhaps the most sobering thought is  almost all the close friends  have gone before her, leaving few if any contemporary’s to read this :it’s a problem of being 101 . Maybe a nice one to have, but a bit lonely time.

Private family services will be at a later date.