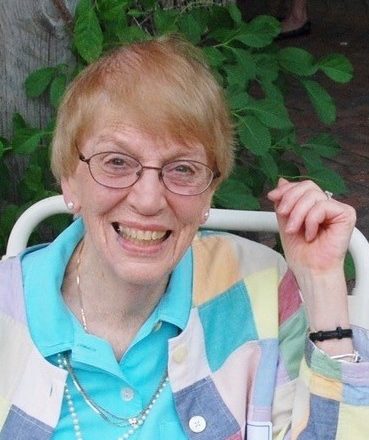 It is with heavy hearts that we must pass on the message that the world has lost another truly unique soul in Elizabeth “Betty Lou” Aik, who died peacefully at home in Sister Bay.

Born to loving parents Millie and Ben Greb, she was the youngest of three exceptional daughters. She grew up in the Fox Valley area and made sure to constantly remind us that there was never a moment in her life when she didn’t feel completely loved by her family, friends and community.

Betty often spoke of her childhood and the simple happiness she remembers growing up in an age without the complications of today’s technology and constant development (though she would later admit how wonderful it was to see her grandchildren across the world on FaceTime). During her young-adult years, she bore witness to the horrors of war, and from it grew a tenacious passion and belief in world peace that will have lasting effects long beyond her death.

In 1947, she graduated from the University of Wisconsin-Madison with a degree in economics during a time when only approximately 5 percent of women were earning four-year degrees. She was a Badger through and through and still choked up at the three graduations of her grandchildren when she stood to sing “Varsity.”  Betty was fascinated by world economics, politics and human rights, and she had aspirations of moving to Europe after the war to provide humanitarian relief.

Life, however, had other plans, and one serendipitous night in Ann Emery Hall, she spotted the absolute love of her life, Robert M. Aik, from across the dining room. Their love story was her favorite one to tell, and she always claimed, with starry eyes, “We still had a crush on each other, kids.”

Her life with Bob began on July 24, 1948, when they were wed in Millie and Ben’s backyard. Their love story flourished as they welcomed and raised three remarkable children, Sarah, Betsy and Tim. Betty’s fierce passion for humanity never faltered, and although she dedicated most of her daily life to raising her children, she was always an integral part of her community, founding the Meals on Wheels chapter of Neenah as well as The Market Place, which featured her love and passion of antiques through estate sales.

In the late 1960s, Betty and Bob began to put down roots in Ephraim, where they retired permanently in 1982, and she continued to be an advocate for all those in need. In Ephraim she furthered her volunteer and community work through contributions to the Ephraim Historical Foundation, the Ephraim Yacht Club, The Ridges and perhaps most importantly, The Clearing.

She was a person of uncommon curiosity, continually trying to expand her scope of knowledge, and the classes at The Clearing were a fundamental part of that. Even into her 90s she was taking classes on everything from world religions to sports and cowboy movies. She had the utmost respect and concern for our environment and was the driving force behind the Ephraim recycling program, not to mention an activist who wrote to her politicians on a regular basis.

Her later years in Door County were marked by the loss of her best friend and confidant, Bob, who passed in 1995. Despite her grief, she would continue to quench her thirst for discovery with trips around the world to places such as France and New Zealand, as well as an unforgettable trip to Colorado with her family in honor of Betty and Bob’s 50th wedding anniversary.

She was preceded in death not only by her loving husband, Bob; but also her parents, Millie and Ben Greb; and her sister, Marguerite Tirk. She is survived by her sister Mary Ginke; her children, Sarah (Mark) Woerfel, Neenah, Wisconsin, Betsy (Marco) Prete, Wheaton, Illinois, and Tim (Barb) Aik, Mequon, Wisconsin; as well as her six exceptional grandchildren, Emily and Lucy Woerfel, Sam and Billy Prete, and Libby and Sarah Aik; and numerous nieces and nephews.

She cared deeply for everyone she met, and she always reminded us to remember that each and every one of us is made of the same stardust and all deserve the same love. No one who met her was left indifferent, and those who had the pleasure of knowing her will allow her spirit to continue to illuminate the world. We are deeply saddened by her passing but take comfort in knowing that she passed quickly and effortlessly from one dream to the next, almost certainly stepping out on her back deck with her favorite straw hat, taking Bob’s hand, watching the sunset and whispering, “How lucky can we be?”

The family would like to express their deep gratitude to the Meadows Apartments at Scandia Village for not only the care and assistance they provided to Betty and her children, but for creating a place she could call home during her final three years.

In lieu of flowers — because Betty preferred flowers stay right where they are — donations to the Ephraim Historical Foundation and The Clearing are greatly appreciated.

Casperson Funeral Home in Sister Bay is assisting the Aik family. Expressions of sympathy, memories and photos of Betty can be shared through her tribute page at caspersonfuneralhome.com.