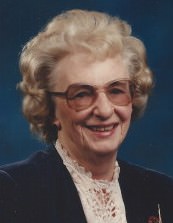 She was born Elizabeth Jean Barr on August 31, 1931 in Milwaukee, to Jeanette (Walker) Barr and Arnold Henry Barr, MD. Elizabeth graduated from Port Washington High School in 1949 and later from St. Olaf College in 1953 with a B.A. in Biology. She received an M.S. from Michigan State University in Guidance and Counseling in 1959. In 1974, Elizabeth completed her M.S.S.W. in Social Welfare at the University of Wisconsin, Milwaukee. She married Bradford Oliver Bylaska on August 3, 1953 in Saugatuck, MI. They adopted two children: a daughter, Corene Robin and a son, Eric Jon. Elizabeth and Brad were divorced in 1970, and he preceded her in death.

Elizabeth worked as a school social worker for Door County School Districts. Eventually she changed career paths and became a real estate agent, a field in which she worked throughout Door County until her retirement several years ago. Elizabeth was also a professional legal guardian for adults.

She had a life-long love of music. Elizabeth played the clarinet and oboe and enjoyed going to musical theatre performances and orchestral concerts. She loved singing and performing and had a regular Saturday night date with her friends and the karaoke microphone for many years and was a longtime member of a barbershop quartet in Sturgeon Bay and Sweet Adelines.

Elizabeth also loved to travel and visited all 50 of the United States (many in a motorhome), Canada, Mexico, Europe, Australia, a solo trip to China and Hong Kong and several cruises in the Caribbean.

She is survived by her brother, Robert Barr of Sheboygan; her daughter, Corene (Robert) Drumheller of Appleton, her son, Eric (Barbara) Bylaska of Richland, WA; her three grandsons, Devin, Garrett, and Bryce Drumheller; and four great-grandchildren.

Elizabeth was preceded in death by her parents; and an infant grandson.

Family and friends gathered on Jan. 30 at Huehns Funeral Home in Sturgeon Bay to remember Liz. Condolences, memories, and photos of Liz may be shared with her family at www.huehnsfuneralhome.com.