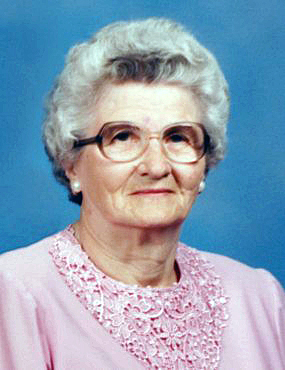 Ella Hannah Kramer, age 102, died Tuesday, October 11, 2016, at the Golden Living Center-Dorchester in Sturgeon Bay, where she had resided for the past several years.

Ella was born at home during a fierce snowstorm on February 6, 1914, in Brussels to Ernest and Helena (Pagel) Rackow. She grew up on the family farm, where she developed her love and talent for growing things and her habit of hard work and perseverance, and caring for others. Ella attended Emanuel Ev. Lutheran Church in Kolberg where she was confirmed in 1927. In addition to farming, she worked in Kewaunee for a time as a nanny for a physician’s family.

Ella met the love of her life, Lloyd Edward Kramer, at a local dance. His ballroom skills impressed her, and the following week they decided to again meet up at the dance and eventually began arriving at these dances together! They were married on October 4, 1933. They first moved to a home on the Kramer family farm and eventually to their own home in Sturgeon Bay. Their son, Edward, was born in 1935 and daughter, Suzanne, in 1946. Niece, Sandra Rackow, born in 1944, also joined the Kramer household, and Ella and Lloyd raised her as their own daughter.

Ella was an excellent gardener and was known for her beautiful flowers as well as fruits and vegetables. She has even earned the distinction of “Garden of the Month.” She was always dedicated to hard work, and it was rare to see her sitting down. When she did, it was often to do a crossword puzzle – which she always did in ink, and she was usually still wearing her apron. A visit to Grandma’s house always meant hugs, cookies in the “cookie drawer,” root beer on the cold back porch, rolling down the big hill in the yard, and making mud pies in the garden. Ella always welcomed into her well-kept home anyone who cared to visit, and somehow she always seemed to magically have a meal ready for them. This meal usually included ham, her own delicious dill pickles, homemade strawberry jam, and German chocolate cake. Nothing in her house went to waste – she composted for her garden, watered her flowers from a barrel of rainwater, she made wonderfully warm woolen quilts from previously-worn clothing, and wove rugs on her loom from leftover fabric scraps. Ella also enjoyed crocheting and made many afghans, flowered pillows, and fancily-dressed dolls. After Lloyd passed away in 2000, she remained in her own home, living independently until the age of 95, when she required some extra help. Since that time, Ella had resided at Golden Living Center-Dorchester, where she had excellent care from their compassionate and skilled nursing staff.

She was a faithful member of St. Peters Ev. Lutheran Church in Sturgeon Bay for many decades.

She is happy to be reunited with her husband, Lloyd, in Heaven; as well as her parents; siblings including brothers, Jack, Rufus, Rudolph and Elton; and sisters, Gertrude and Nora; as well as her son-in-law, Donald Chuppa.

Ella led a very long and full life and leaves behind a strong legacy of a century of love for her family, faithfulness to God, and respect for the Earth. We look up to her as a wonderful example of a loving mother and grandmother that always put others before herself!

Ella’s life was honored with a funeral service on Saturday, October 15, 2016, at Huehns Funeral Home in Sturgeon Bay with Pastor Joel Sauer (of St. Peters Ev. Lutheran Church) officiating. She will be laid to rest beside her husband, Lloyd, in Bayside Cemetery.

Memorials may be given for St. Peters Ev. Lutheran Church in Sturgeon Bay.