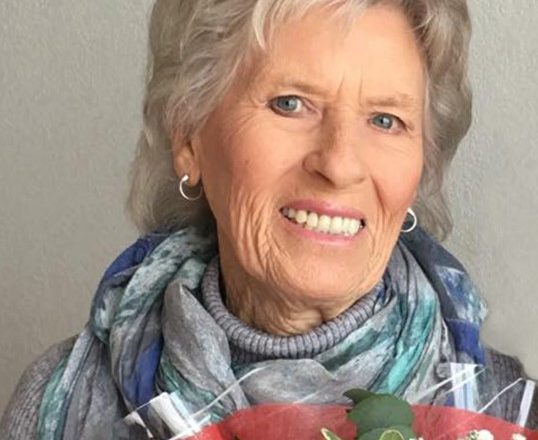 Else Margit Weborg, 84, of Gills Rock, Wisconsin died December 30, 2021. She was surrounded by loved ones, her dog, Zoe, and her favorite flowers, roses.

She was born April 9, 1937 in Copenhagen, Denmark, daughter of Olaf and Ruth Fromm. After Ruth’s early passing, Mary Fromm became her stepmother. Else emigrated from Viborg, Denmark to Door County, Wisconsin at age 14, where she met 16-year-old, David Weborg. David said they were meant to be, since she came from Viborg and fell in love with a Weborg. It didn’t take long before they became inseparable. On January 26, 1957, Else and David Owen Weborg were united in marriage. They would go on to celebrate 64 years of marriage together.

David and Else were also great together professionally. Else’s entrepreneurial spirit and steadfast guidance coupled with David’s industriousness and creativity, they complimented each other through many endeavors.

Else and David purchased a historic building in Appleton, turning it into multiple retail spaces called the Castle Shops. Within it, they ran a store where they proudly sold Scandinavian furniture and gifts, which they named The Little Mermaid, after the famous sculpture in Copenhagen, Denmark. Else, an avid knitter, taught classes in the yarn shop housed within the store.

After selling the Mermaid, they set out on another adventure, turning a broken down old Victorian house into a beautiful bed and breakfast. Else took the reins of the business and made sure the place was booked solid even before David finished the remodel, but she had confidence in David and knew it would be ready when guests arrived. During those days, Else was never seen without her cordless phone strapped to her waist ready to take a reservation. Else loved her flowers and planted hundreds of beautiful annuals making the grounds of the inn burst with color.

David and Else were members of Bethel Baptist Church in Ellison Bay.

Following the devastation of Hurricane Hugo in 1989, they volunteered to help rebuild churches in St. Croix, United States Virgin Islands. They fell in love with the island and later bought land overlooking Buck Island. On this site, David built a beautiful home where they enjoyed Caribbean winters.

She was preceded in death by her parents, Olaf and Ruth Fromm; her stepmother, Mary Fromm; the love of her life, David Weborg; infant sister-in-law, Jean; twin brothers-in-law, Lyle “Tom” (Sandy) and Lynn “Tim” Weborg; and sister-in-law, Lucy Weborg.

Private services will be held in honor of Else’s life. She will be laid to rest in the Ellison Bay Cemetery.

Casperson Funeral Home & Cremation Services of Sister Bay is assisting the Weborg family. Expressions of sympathy, memories, and photos of Else may be shared with her family through her tribute page at www.caspersonfuneralhome.com.