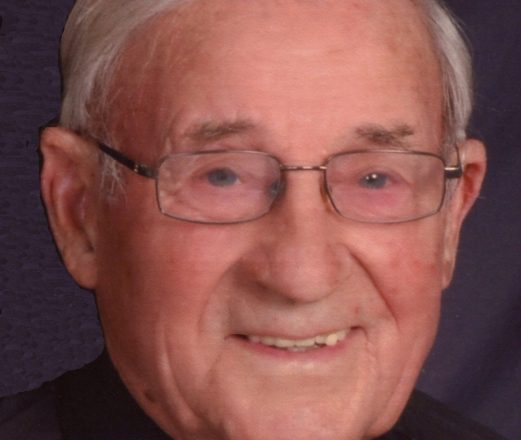 Elton Spaid 95, died on November 13, 2021, at Oak Park Place care center in Green Bay, WI.  He was born on March 20, 1926, on the family farm in the Town of Nasewaupee, Door County, to Emil and Margaret (Pfister) Spaid.  Elton attended Lincoln Grade School and was a 1943, graduate of Sturgeon Bay High School.  He was happy to drive the 1926 “Star” car his Godfather had given him in high school at age 15 without a driver’s license.

Elton served in the U.S. Army during the 1950’s and was honorably discharged as a Corporal in 1955.  On September 15, 1956, he married Jeanette Kostichka at Holy Name of Mary Catholic Church in Maplewood, WI. This year marked their 65th wedding anniversary.

Elton and Jeanette purchased the family farm from his dad in 1957 and it continued as a dairy farm until 1979.  The farm was designated a Wisconsin Century Farm in 1979, the same year Elton gave up dairy farming and started working as a full-time rural mail carrier at the Sturgeon Bay Post Office, where he had been a sub carrier for many years.  He continued in this position until his retirement in 1992.  Elton’s 95 ½ year life span was the longest of any Spaid family member to live on the family farm.  He was constantly making improvements to the farm and maintained a collection of pictures to show how the farm had evolved from very humble beginning to what it looks like today.

In his spare time, Elton liked to grow rose plants he would purchase in places he and Jeanette traveled to, especially red roses.  His vegetable gardens were large and productive until he could no longer take care of them.  In retirement, he enjoyed cross country skiing, boating, and traveling to many National Parks and Museums.  He also enjoyed woodworking and just having time to enjoy the growing family.

Elton also served on the Nasewaupee Town Board for 25 years, first as a Supervisor and later as the Town Clerk.  When he served as the Town Clerk, there were no computers in use, and he and Jeanette spent many late nights making sure the tax roll was accurate.

Elton was a lifetime member of the Holy Name of Mary Catholic Church where he was active in many activities at church.  He especially loved singing tenor with the church choir, he served many years as a trustee, was a lector and distributed communion to the shut-ins, among other activities where he could help out.  Elton was a long-time supporter of children in 3rd world countries and always enjoyed the simple artwork they would send him as a thank-you.

A special thank you to the compassionate care he received the last two years of his life at Oak Park Place in Green Bay.  Also, sincere appreciation for the past six months, to the extraordinary nurses and others from Unity Hospice who cared for Elton-they are angels in disguise.

Funeral mass for Elton will be held at 11:30 a.m. Thursday, November 18, 2021, at Holy Name of Mary Catholic Church in Maplewood, WI with Rev. Anthony Birdsall and Deacon Mark Hibbs officiating.  Burial will be in the church cemetery.  Visitation will be from 10:00 a.m. until the time of services at the church on Thursday.