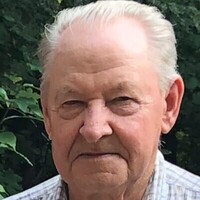 He was born March 2, 1939 in Sturgeon Bay, son of the late Albert and Mary (Miller) Neinas. Elton attended Sevastopol High School. On May 10, 1958, he married Audrey S. Hasenjager at Zion Lutheran Church in West Jacksonport. She preceded him in death on February 6, 2021. Elton was self-employed owning his business Door Radio & TV for many years. He also had a workshop or two and spent many hours building and fixing everything. He was a craftsman making log beds, furniture and playhouses. Elton built two of their homes, one in Sturgeon Bay and one in White Lake, WI where they lived for 20 years. While wintering in Haines City, FL, he remodeled many homes, including his own. He loved old cars, fishing, watching the Packers, playing cribbage, gardening and cooking. He will be greatly missed by his three children, eight grandchildren and five great-grandchildren.

Private family services will be held at a later date.

Expressions of sympathy may be sent to the family by visiting www.harriganparksidefuneralhome.com