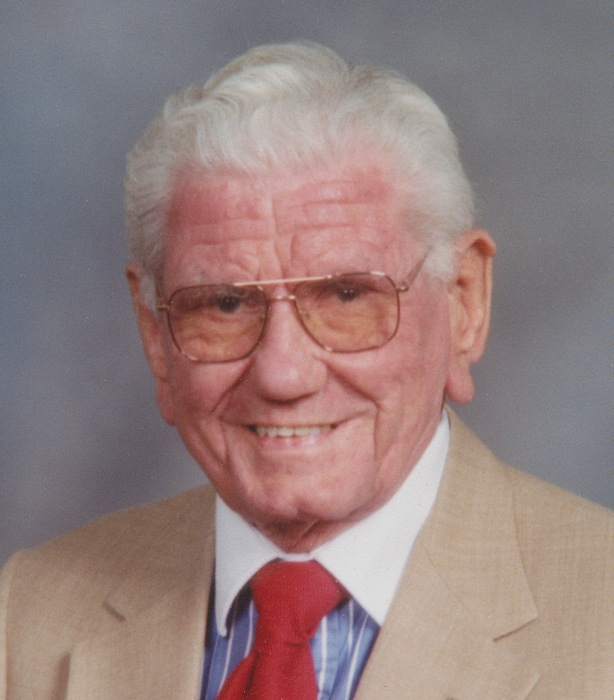 Emery R. Krueger, 92 years, of Sturgeon Bay, joined the love of his life in heaven on Monday morning January 4, 2016.

He was born January 20, 1923 in Green Bay, the son of the late Richard and Louise (Nowitke) Krueger. Emery attended Roosevelt Grade School and Green Bay East High School class of 1941. Following his graduation from high school he was employed with Kraft Foods Company until he entered the service in January 1943. Emery served his country with the U.S. Army. He was first stationed at Camp Swift Texas Army base. In January of 1944 he deployed overseas and served in the European Theatre during WWII in General Patton’s Third Army as a member of the 553 Engineer battalion. They received four major battle stars. Emery returned home from WWII in the European Theatre with an honorable discharge in 1945.

He returned to Kraft Foods for a short time before attending UW Madison where he met his wife Betty Lau and they were married on September 2, 1950. In 1951 they moved from Madison to Sturgeon Bay and started what would be Em’s Sporting Goods on Jefferson and Fourth Avenue and two years later opened Em’s Beer Mart there which they operated for 33 years. They also owned the Bottle Shop on the West Side of Sturgeon Bay.

In 1953 Emery was approached by Fred Thomas from Pennsylvania, home of Little League, who asked why we didn’t have Little League Baseball in the community. Emery wrote to the Little League association and received a positive reply on starting a league in Sturgeon Bay. Em spent the next week contacting local businesses, business men and local officials to explain Little League and what they were trying to accomplish. Fred Thomas contacted the parents of the local baseball players and a meeting was held and the Sturgeon Bay Little League was born. At its inception Emery would never have imagined how many thousands of boys would participate in the program over the 30 years he was involved.

Em and Betty sold their businesses in Sturgeon Bay in 1984 and retired to their cottage business on Bay Shore Drive. Em and Betty loved to travel, and they did, throughout the world. They enjoyed square dancing and were members of the Peninsula Promenaders. Em was a life member of the Elks Club and was Elk of the year in 1991-1992. He also was a member of the Amvets Post 51, and a volunteer at the Miller Art Museum and Fairfield Art Gallery. Em was a member of the Sturgeon Bay United Methodist Church and Men’s Club. He was a constant helper at the annual Lumberjack Supper’s for approximately 50 years.

Following his retirement he enjoyed hobbies of stained glass, mixed media drawing and painting. Then later changed his interest to wood carving. Some of his work has been displayed at juried art shows, local museums and in private collections.

Preceding him in death were his parents, Richard and Louise (Nowitke) Krueger; wife Betty Lau Krueger in 2004; his sister, Elaine (Krueger) Hale; many brothers and sisters-in-law.

Funeral service with military honors will be held at 11:00 a.m. on Saturday January 9, 2016 at Sturgeon Bay United Methodist Church with Rev. David Leistra officiating. Burial will be made in Bayside Cemetery.

Friends may call at Huehns Funeral Home from 4:00 to 7:00 P.M. Friday evening and at the church on Saturday morning from 10:00 a.m. until the time of services.

In lieu of flowers, memorials in Emery’s honor appreciated for the Sturgeon Bay United Methodist Church or Boys and Girls Club of Door County.