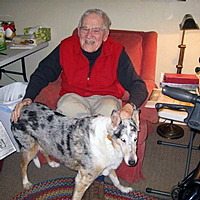 Erhard (John) Adolph Zeile died peacefully on September 19, at Hearthside in Sister Bay, Wisconsin. A memorial service will be held on Saturday, November 11 at 1pm at Shepherd of the Bay Church in Ellison Bay, Wisconsin. John’s nephew, Reverend Carl Voges, will co-officiate with Reverend James Honig.

John was born on February 4, 1925, in Saginaw Michigan and was the youngest of six children born to Andrew and Hilda Zeile. He was married to Jean Lenore Anderson for 64 years until her passing in 2012. He attended Concordia Lutheran Seminary and served as an ordained minister for over 65 years in several Michigan churches, and he served as pastor of St. Paul Lutheran Church in Mt. Prospect, Illinois for 28 years prior to his retirement. After retirement John and Jean moved to Door County and he served as an interim/guest pastor and teacher in several congregations on the peninsula.

John is survived by his sons Andrew of Wauconda, Illinois, Mark of West Bend, Wisconsin, and his daughter, Kris Zeile, of Barrington Illinois. His passing was preceded by the loss of his eldest daughter, Martha, in 2009. He is also survived by three granddaughters and two great-granddaughters as well as his beloved brother, Louis Zeile, of Saginaw, Michigan.

John’s joy was found in the nearly 30 years he spent on the Door County Peninsula, where he continued to serve and minister and, along with Jean, enjoy the beauty and wonder of his Lake Michigan shore and his beloved collies over the years.

Memorials in John Zeile’s memory are appreciated for Shepherd of the Bay Lutheran Church’s designated fund devoted to ministry and care for elders in the community.