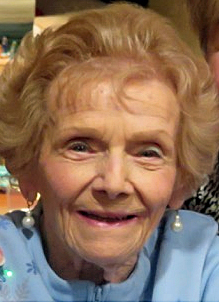 Esther Elizabeth “Betty” Branson Kwaterski passed peacefully on Saturday, Sept. 3, 2016 at the UW Madison Hospital with family near her. She lived a full life of 92 years and calmly managed her life until her last breath.

Betty was born on Aug. 9,1924, at Augustana hospital in Chicago, Ill. to Carl and Esther (Perrson) Stromberg, originally from Hoganas, Sweden. She married the love of her life (the late) Henry E. Branson in Chicago on Oct. 18,1947, and they raised two daughters, Patricia Elizabeth and Linda Ellen, until his passing in June 1966. Betty married (the late) Florian J Kwaterski of Baileys Harbor, Wis., in June of 1969, moving to Door County and enjoying her second marriage and business partnership until his passing in 2014.

Betty’s parents were Swedish immigrants who established a successful business in Chicago. Reminded of their homeland, they purchased the island on Kangaroo Lake in Baileys Harbor, Wis. in 1922, as a summer residence where the family (Stromberg Brothers) began their love for Door County which has continued through five generations. Betty celebrated her first birthday on the island and enjoyed Door County for her entire life. Growing up in Chicago she graduated early from Senn High School in Chicago in 1941, and began working in the banking industry in downtown Chicago. Betty was the first female to be bonded to carry notes to Chicago banks and the Chicago Board of Trade. She was a member of Beta Sigma Phi International Business Sorority and was an auditor for the US Treasury Department before marriage and family.

Betty was known for her kindness, love and optimism. Everyone knew her as a genuine, classy, compassionate lady. Caring for her family and home was Betty’s passion and purpose in life and she enjoyed family gatherings right up to her passing. She loved watching her life expand through her daughters, son-in-law, grandchildren, great grandchildren, nieces and nephews, and her step family. She loved music and dancing, dogs, flowers, birds, swimming, playing bridge, entertaining, dressing well, her Swedish heritage and being an excellent cook. Betty was a 42-year cancer survivor, a great community supporter, member of the Baileys Harbor Business Association and Women’s Club, Immanuel Lutheran Church in Baileys Harbor and Bethel Lutheran in Madison, Wis. Above all, she will be known and missed for her compassion for everyone she came in contact with, and 92 years of memories worth celebrating.