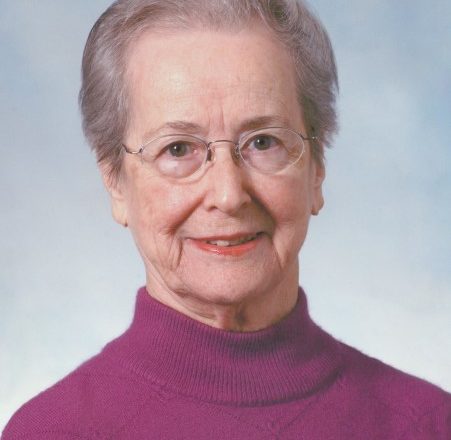 She was born March 18, 1927 to Carl Roger and Grace Maude (Householder) Bennett in Bonaparte, Iowa. She attended public schools and was active in clubs at Fort Madison High School, where she graduated in 1945. Esther then completed training at secretarial school in the Quad Cities and worked for the Iowa-Illinois Power Company. She met John Eshelman on a blind date, and they were later married on October 16, 1948 in Moline, Iowa. Together, they created a home for their daughter, Susan. John worked for PPG Industries, a job that took them to Dubuque, Jesup, and Iowa City, Iowa and Moline, Illinois. Esther and John traveled across the United States, being to all but a few states. Living in Iowa City, she was a loyal Hawkeye fan and attended many basketball and football games, including a few Bowl games. Esther worked and volunteered for the University of Iowa Hospitals. Esther loved being a housewife and mother. She was an excellent cook, especially baking pies, and seamstress, she even made all her and her daughter’s own clothing. She did handwork including knitting, crocheting, and embroidery. She was active in the United Methodist Church and served on several committees, sang in the choirs, and was a member of the United Methodist Women. She enjoyed card games, dancing, volleyball, walking, gardening, crafts, bingo, and the various events at the senior center. She most loved her time with family.

Esther will be missed by her daughter, Susan May; grandsons, Keith (Maire) Harris and Paul (Nina) Harris; sisters-in-law; brother-in-law; and several nieces, nephews, and friends.

She was preceded in death by her parents, Carl and Grace Bennett; husband, John Eshelman; and brothers, Grant (Ruth), Cecil (Barb), Charles, and Wesley.

In honor of Esther’s wishes, a graveside service will be held at Bayside Cemetery when the weather permits. Donations can be made in Esther’s name to help provide meals for students to the Sturgeon Bay School District/Food Services, C/O Jenny Spude, 1230 Michigan St., Sturgeon Bay, WI 54235.

Huehns Funeral Home, Inc. & Door County Crematory LLC of Sturgeon Bay are assisting the family. Expressions of sympathy, memories, and photos of Esther may be shared with her family through her tribute page at www.huehnsfuneralhome.com.