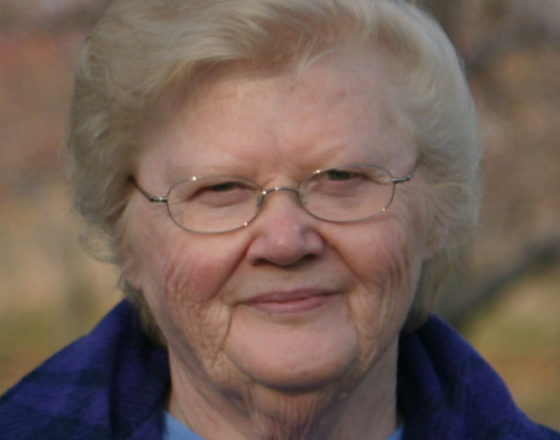 She was born in Dhulia, West Khandesh, India, where her parents served as missionaries. Moving to the United States with her father at the age of 12 after the death of her mother, Eunice spent most of her childhood in the Chicago area. A graduate of Wheaton College in Wheaton, Illinois, she continued her studies in nursing at West Suburban Hospital in Oak Park, Illinois, receiving her nursing diploma in 1954.

While working as a nurse at the Salvation Army Harbor Light Center in Chicago, she met her future husband, Walter McClintock, who would become the director of the mission. Marrying in 1964, Eunice and Walt devoted their lives to bringing the hope of the gospel to men and women suffering on Chicago’s “skid row,” retiring in 1989 to Hayward, Wisconsin.

After her husband’s death, she moved to Sturgeon Bay, where she met and married Jim Wood in 1999. As a “retired” couple, Eunice and Jim stayed active with Jim’s family orchard, their church, and three memorable mission trips to Thailand. After Jim’s death, Eunice moved by her daughter in Marshfield, Wisconsin.

She was a wonderful mother and grandmother and highly cherished her family. She loved to paint, talk with people and share her love for Jesus with everyone she met. She was also a mighty prayer warrior and would spend hours in prayer. Most of all, she loved her Lord.

She is survived by a son, Scott (Kelly) McClintock of Wayzata, Minnesota; a daughter, Carol (Larry) Sheahan of Marshfield, Wisconsin; and five grandchildren, Brian, Brandon, Rachael, Andrew, and Matthew.

She was preceded in death by her parents; an infant sister, Betty Maria; her first husband, Walter; and her second husband, Jim.

A committal service will be conducted at the Bayside Cemetery Chapel in Sturgeon Bay on Monday, Feb. 24, 2 pm. Friends may call at the chapel on Feb. 24, 1-2 pm. A memorial service is also planned for Saturday, Feb. 29, 2 pm, at Faith Fellowship Church in Marshfield, Wisconsin (217 W. McMillan St.). The family will receive friends and relatives Feb. 29, 1-2 pm, at the church. Forbes Funeral Home is in charge of arrangements.