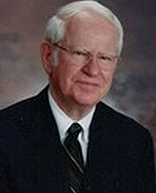 Evan (Shelly) Kjellenberg, 82, of Sister Bay, died peacefully in his sleep on Jan. 18, 2018. Born in Peoria, Ill. and raised in Cincinnati, Ohio. Shelly earned a full scholarship to Dartmouth College and finished his last year at Tuck School graduating in 1957. He went on to the University of Chicago Law School and earned a J.D. degree. Shelly met the love of his life at Green Mountain College of Vermont and on September 6, 1958 married Marilyn Medl of Evanston, Ill. They spent 59 and a half wonderful years together.

He is survived by his wife Missy, daughter Suzanne, son Todd (Paula), sister Marilyn Anderson of Illinois and two grandchildren Shane and Shannon.  Shelly was in private practice of law for 36 years. His greatest honor in 1983 was to be asked by Secretary of State, Jim Edgar, to chair the Committee of Commercial Code of Illinois and rewrite the code of 1936. He enjoyed his membership in the Chicago Law Club.  Since 1996, Shelly decided to start a law practice in rural Wisconsin and retired in May of 2014.  Shelly enjoyed 25 years of Evanston’s 4th of July association, barbershop singing with the Arlingtones competitive chorus, Sister Bay historical society and loved volunteering with fellow Lion’s club members for 20 years.