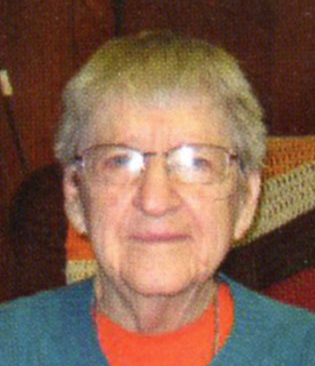 Evarista “Evie” Dorothy Nell, 89, of Forestville, passed away at her daughter’s home on March 12, 2018.  She was born December 25, 1928, in Algoma to Wenzel and Louise (Paul) Fiala.  Evie graduated from Algoma High School and on April 14, 1953, she married Orland Nell in Algoma.   He preceded her in death on January 10, 2003.  Evie enjoyed playing cards and spending time with her family and friends.

Funeral services will be 11 am, Saturday, March 17, 2018, at Holy Name of Mary Catholic Church in Maplewood. Burial will be in the church cemetery.  Visitation will at the church on Saturday from 9:30 am until the time of service.  Forbes Funeral Home is in charge of arrangements.  Online condolences may be offered at forbesfuneralhome.com

Special thanks to Unity Hospice, Dr. Hogan, Ministry Home Health Care and everyone who cared for Mom for the last 10 months.