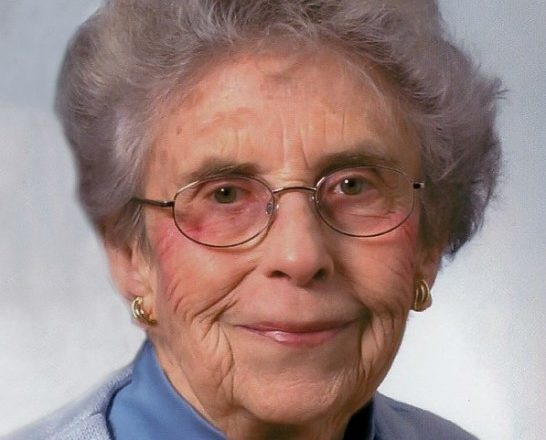 She was born in Jeffersontown, Kentucky, the daughter of William and Sally Kemp (Sweeny) Baumlisberger. Frances grew up on the family farm, and after graduating from high school, she attended college in Louisville for two years. She graduated from Wittenberg University in Springfield, Ohio, with a chemistry major. Later, Frances attended school in California to obtain her substitute teacher’s certificate.

On June 4, 1947, Frances and Walter Dobrick Alvin were united in marriage and recently celebrated 72 years of marriage. They were members of the Sturgeon Bay United Methodist Church. The two lived in many places — Chicago, Los Angeles, Mountaintop (Pennsylvania), New Jersey, Dallas, St. Louis, Orlando and Sturgeon Bay — always meeting new people through church and playing bridge. Frances and Walter cruised the world and traveled throughout the United States and Canada in their RV.

She was a homemaker and especially enjoyed cooking, sewing, knitting and traveling. Frances worked in chemical laboratories and as a substitute teacher. She was a member of the Door County Medical Center Auxiliary and played duplicate and party bridge.

Frances’ life will be honored with a memorial service Friday, Nov. 22, 11 am, at the Sturgeon Bay United Methodist Church, with Pastor David Leistra officiating. She will be inurned at the Bayside Cemetery Columbarium.

In lieu of flowers, donations can be made in Frances’ name to the Chemistry Department at Wittenberg University or Unity Hospice.

The family wishes to extend heartfelt thank-yous to Dr. Richard Hogan, Unity Hospice, Anna’s Healthcare and Home Instead for the care they provided to Frances.

Huehns Funeral Home and Door County Crematory of Sturgeon Bay are assisting the Alvin family. Expressions of sympathy, memories and photos of Frances can be shared through her tribute page at huehnsfuneralhome.com