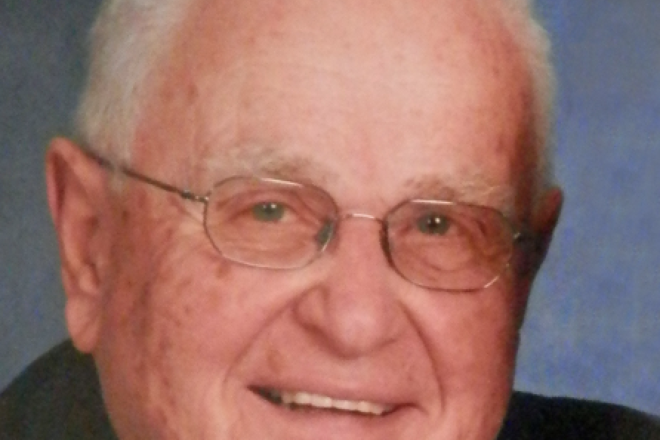 He was born on September 5, 1933, to George K. and Susanna (Tansing) Walther, in Sturgeon Bay.  He was their final child of four and their first son.

George was best known for his sense of humor and for being a lifelong fixture on Sturgeon Bay’s west side.  He was born at his family’s home and died in the house he owned for 58 years, both on the Sawyer side of the bay.  He attended school at West Side Elementary, later attending Sturgeon Bay High School and graduating in 1951.  That same year George began his 44 year career at the Bank of Sturgeon Bay (now Nicolet), which continued until his retirement in 1995.  From 1965 to 1995 he served as manager of the “Greater West Side” branch of the bank.

George was a lifelong member of Saint Peter’s Ev. Lutheran Church.  From there he was baptized, confirmed, and married, and will now be buried.  He was proud that his great grandfather Christian Tansing was a founding member of the congregation and that his father supervised the present mason work of the church.  George himself served as treasurer of the congregation and burned the mortgage on the present structure.  His children became the fifth generation of his family to belong to Saint Peter’s.

On September 29, 1962, George married the former Patsy Wolske.  Their marriage was blessed with three children: son, Karl (Sandy, nee Bartel) and their children Nathan (Heather, and sons Elijah and Daniel), Amanda (Josh) Ofstie (with son Malachi), Christopher (Katie), and Alyssa; daughter, Lynn Lorenson and her children Dellin and Isaac (Jessica Calliari); and son, Barry who remains in the Sturgeon Bay area.  After Patsy’s death in 2004, George married Elizabeth Boettcher on October 29, 2005—welcoming into his family: Anna Kolb with children Lauren, Tristan, and Salamnesh, also Tina, and John.  George also leaves behind a brother-in-law, Russell Eckman, many nieces and nephews with their families.

A public visitation will be held at Forbes Funeral Home on Saturday, Oct. 31, 2020, from 11:00 am until 1:00 pm.  A private family service will follow with the Rev. Joel Sauer officiating.  All visitors are required to wear face masks, and social distancing measures will be implemented during the visitation.  Burial will be at St. Peter’s Lutheran Cemetery in Forestville.  A larger celebration of George’s life is planned at the church during spring or summer of 2021.  Memorials may be directed to St. Peter’s Lutheran Church and School.