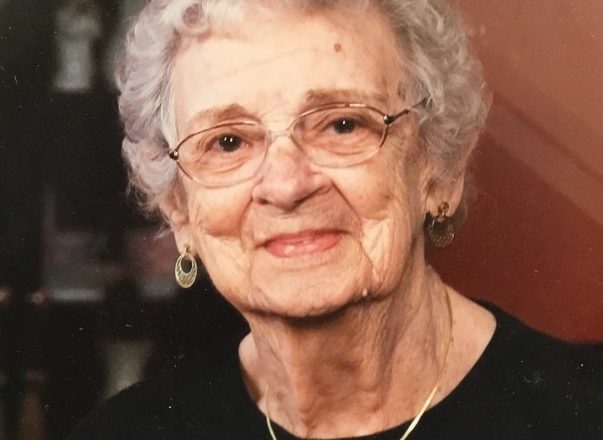 Grace was born in Hamilton, Ohio, to Catherine and Harry Remle. Grace was married to Samuel Carberry shortly after she graduated from high school, but both Grace and Sam contracted tuberculosis within a year of their daughter, Susan, being born. The three of them were then separated to live and recover. Unfortunately, Sam died before Grace could see him one more time.

Once Grace recovered, she reunited with Susan, and also met her future husband. Paul Bergmann was enchanted with Grace, the fun-loving dancer. They soon wed, and after the ceremony, Paul, Grace, and Susie hopped a train for Chicago, where Paul began work at the Bergmann Orthotic Laboratory owned by his oldest brother, Dr. Carl Bergmann.

Eight years into the marriage, the family of three became four, with the arrival of daughter, Jean. They moved from Chicago to Park Ridge, Illinois, and then Grace and Paul retired to Bayonet Point, Florida. They eventually returned to Illinois to settle in Peru, where Paul died in 2006 within four months. Grace continued to live in Peru, then moved to Ottawa, Illinois, until arriving at her final home within the Good Samaritan Society in Sister Bay. This last move was to be closer to her daughter Susan and husband in Door County.

Grace was an extremely sassy, funny and quick-witted woman. Her humor was what most family members and friends recall. During her lifetime, she was an avid baker (best pie maker in the family) and passed this enthusiasm on to her many grandchildren and great-grandchildren, who also excel and enjoy cooking.

Grace enjoyed the textile arts of sewing, knitting, and crocheting, and she shared this love with her two daughters and granddaughters. She indulged in many hobbies, including years of making Christmas decorations to sell at a holiday bazaar in Park Ridge, Illinois. There was also square dancing, bowling, bridge and golf, which was shared with their group of longtime friends. Golf, which was taken up in her sixties with this group of ladies (so they could join in with their husbands) is what led her and Paul to join the Elks Club in Des Plaines, Illinois. Grace was still playing at age 90 in Florida up to three times a week, but maybe not all 18 holes.

Grace touched the lives of all the people she met in all the locations she lived. People always told both daughters about her humor and sassy attitude. Her family of grandchildren and nieces and nephews speak of her as being their favorite grandmother or aunt. The friends she made were always sorry to see that she was moving on to another place. Her family is saddened that this delightful woman has moved on as well to her eternal rest.

A celebration and remembrance for family will be scheduled later.

Casperson Funeral Home and Cremation Services in Sister Bay is assisting the Bergmann family. Expressions of sympathy, memories and photos of Grace can be shared through her tribute page at caspersonfuneralhome.com.