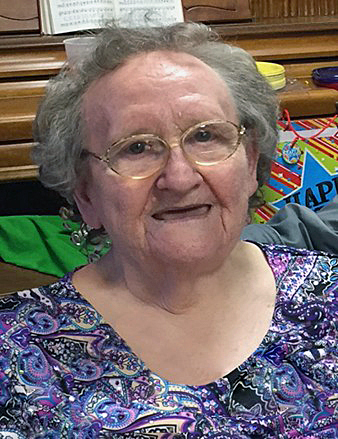 She was born January 27, 1936 in Algoma, the daughter of the late Henry and Alma (Kay) Hafeman. Grace graduated from Algoma High School in 1955. On August 25, 1956, she married Edmund Thomas Horner in Algoma. They moved to Two Rivers where they worked at Mirro and began their family. Edmund died on August 22, 1981. With six beautiful children, Grace continued to work at Mirro and provide for her children. She was so proud that she was able to see them all complete high school and to see Jill receive her degree from college. Grace worked at Mirro until her health would no longer allow, and she retired in 2000 and was awarded the designation of “Mirro Hero.” For some years, she was able to live and enjoy being near to some of her children and summers with her brother, Don. She moved to Sturgeon Bay in 2015.

Her family meant everything to her, and she was especially close to her grandchildren and great grandchildren. Sundays were spent with family playing cards, and when Edmund was still with her, they loved to Polka dance at the Dugout in Algoma (where they first met) and at home, turning on the local Green Bay Polka shows, dancing together. She loved to crochet and make afghans for family and friends. She was not afraid to travel and drove a RV motorhome with the entire family as they would vacation together.

Gracie’s life was not easy; it made her tougher than most. She was a hardworking woman who loved her Lord and who kept her family together, especially at holidays, she loved to play cards especially with family and friends, and had an extremely strong sense of humor. She did not do much for herself, but after retiring, she finally enjoyed some pampering-having her nails done monthly.

Funeral services were held Sept. 11, 2016 at St. Peters Ev. Lutheran Church in Sturgeon Bay with Rev. Joel Sauer officiating. In lieu of flowers, memorials would be greatly appreciated for the family of Grace Horner.

“A special thanks to the staffs of Golden Living Center-Dorchester and AsceraCare Hospice for the kind and compassionate care shown to our mother.”

Huehns Funeral Home & Cremation Services in Sturgeon Bay is assisting the family with arrangements. Condolences and guestbook signing may be offered at huehnsfuneralhome.com.