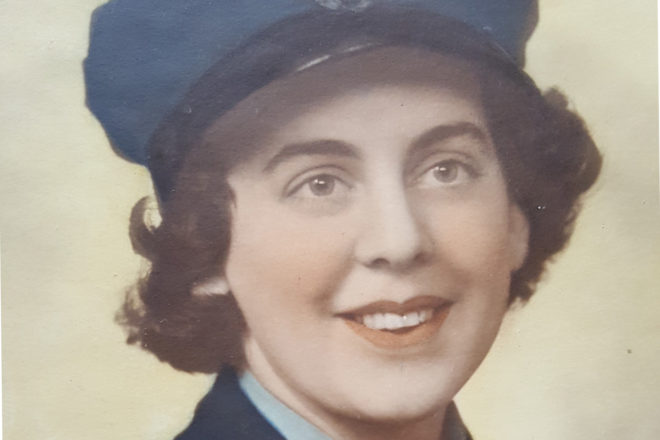 Gwendoline Margaret Raddatz, age 94, passed away on Tuesday, April 19, 2016. She was a resident of the Willowcrest Nursing Pavilion in Sandwich, IL, for the past two years, and a former resident of Joliet, IL and Baileys Harbor, WI. She was preceded in death by her loving husband Robert and mother Louise Rushton and brother Ralph. Mrs. Raddatz was born in Naracoorte, South Australia on September 28, 1921. She and her late husband met and then married in Brisbane during World War II. He was a lieutenant in General MacArthur’s headquarters, and she was a telegraph operator for the Women’s Auxiliary Australian Air Force. She came to the United States in September 1943, while her husband continued to serve in the South Pacific until the end of the war. Throughout her life she enjoyed her family, gardening, and being active in her community and church. She was a charter member of Our Savior Lutheran Church in Joliet. She is survived by her five children:  Susan (James) Spina of Plainfield, IL; Jennifer Kryzak of Coppell, TX; Roberta (Denny) Davenport of Geneva, IL; Mark Raddatz (Sue Fischer) of Jacksonport, WI; and Wendy D’Arcy of Plainfield, IL; fourteen grandchildren; sixteen great grandchildren; and numerous nieces and nephews in Joliet, as well as Australia.

Donations for a permanent memorial in Baileys Harbor, Wisconsin in Gwendoline’s memory are appreciated. Arrangements by Sullivan Funeral Home Hinsdale. 630.323.0275 or www.sullivanfunealhomehinsdale.com