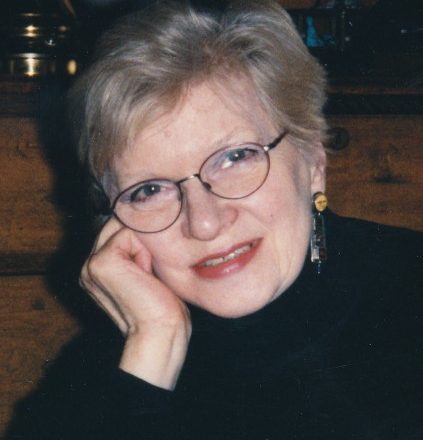 She was born in St. Johns, Michigan to Derrill McKee Shinabery and Laura Theodora (Cox) Shinabery and was the eldest of five children. Gwendolyn married Raymond J. Perry and had one daughter, Kathy Jo. That marriage ended in divorce in 1953. In 1954, she married Norman Truax, from whom she was divorced in 1956.

In 1956, she moved from Michigan to Miami, Florida, and lived in Miami, Arcadia, and Ocala, Florida, until moving to Chicago in 1968. There, she attended Roosevelt University and obtained a master’s degree in liberal arts. In 1979, she moved to Fish Creek, where she opened Gwendolyn’s Jewelry and Gallery. In 1999, she moved her business from Fish Creek to Sturgeon Bay’s 3rd Avenue and bought a home in Sturgeon Bay in 2003.

She dearly loved Gwendolyn’s, which was not just her work but her social life as well, treasuring the many friends she made over her 38 years in business. She enjoyed music and art, which was reflected in the artworks represented in her gallery. A fiercely independent, determined woman, she worked many long hours, often seven days a week. Sadly, she suffered a fall in 2017 and had to give up her shop, which truly broke her heart and spirit. She had resided at Scandia Village since April of 2018.

She was preceded in death by her parents; sister, Evangeline Kilday; and son-in-law, Richard “Sandy” Hollister.

At her instruction, there will be no service, and her remains will be buried in the St. John’s Cemetery in St. John’s, Michigan, next to her parents.

Casperson Funeral Home and Cremation Services in Sister Bay is assisting the family. Expressions of sympathy, memories and photos of Gwendolyn can be shared through her tribute page at caspersonfuneralhome.com.