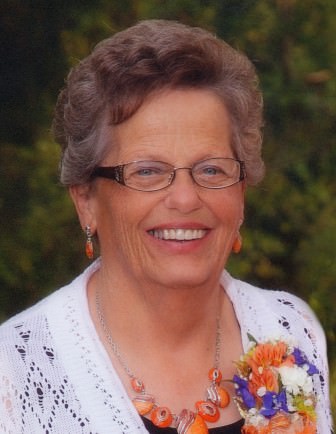 Helen Ann Ploor, 71 years of Sturgeon Bay, Town of Sevastopol, was called to eternal rest on Friday morning, January 6, 2017 at her home, following complications after her open heart-surgery.

She was born May 1, 1945 in Sturgeon Bay, the daughter of the late Henry and Mildred (Writt) Conlon. She was graduated from Sturgeon Bay High School in 1963. On August 8, 1964, she married Daniel L. Ploor at St. Joseph Catholic Church in Sturgeon Bay. She and Dan farmed the Ploor family farm in Institute where they raised their seven children.

Helen enjoyed baking for family and friends. She was known for her famous cookies which were sold at Welsing’s in Valmy for many years. She also volunteered as a Reading Buddy at St. John Bosco Catholic School in Sturgeon Bay for more than 18 years.

A Mass of Christian Burial will be celebrated at 11:00 a.m. on Wednesday, January 11, 2017 at S.S. Peter and Paul Catholic Church in Institute with Rev. Robert Stegmann and Rev. Anthony Birdsall, celebrants. Helen will be laid to rest in the church cemetery.

Memorials may be given in her memory to St. John Bosco Catholic School, S.S. Peter and Paul Church Choir, or Zion Lutheran School in West Jacksonport.

Condolences, memories, and photos of Helen may be shared with the Ploor family at www.huehnsfuneralhome.com.