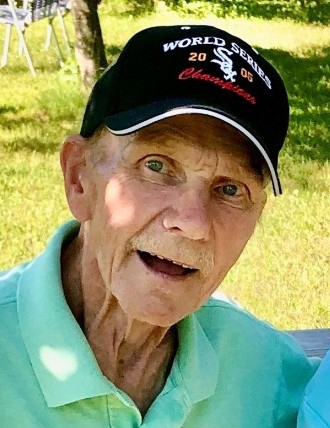 Hugh Edward LeVoy, 81, of Ellison Bay died at Door County Medical Center in Sturgeon Bay, with his wife at his side.

He was born in Chicago to Patrick John LeVoy and Margaret Mary (Flanagan) LeVoy. “Hughie Boy” was one of six children and a true city kid. Growing up, he loved playing baseball in the streets and sneaking into Comiskey Park to watch his beloved White Sox.

Hugh studied at a variety of venerable Midwestern institutions, including St. Anthony’s Elementary School; De La Salle Institute; St. Thomas College in St. Paul, Minnesota; the Illinois Institute of Technology; and Loyola University. For a time, he considered his life’s work to be in the priesthood, studying at Mundelein Seminary before deciding on a vocation of elementary education. Hugh served for four decades as a teacher and principal in the Chicago Public Schools and finished his work as principal of Corpus Christi School in Sturgeon Bay in 2002.

Hugh met his lifelong partner, Lenore “Lee” Dunworth, while on opposite ends of a double date. They married in June 1967 and enjoyed more than 52 years of marriage split between Chicago and Door County. They were blessed with three children, Michele (Adenilson) Pereira-LeVoy, Nicole (Arthur) Saldanha, and John (Susan) LeVoy. Hugh is further survived by nine grandchildren spread from Belgium to Florida to California; and his sister, Maureen Ranis.

Two of Hugh’s passions were home renovation and youth development. He learned renovation from his father at a young age and continued the legacy by improving the family’s homes in Chicago and Niles, Illinois. His work culminated with building his and Lee’s retirement home in Ellison Bay, a project that began with the purchase of the property in 1979 and concluded with the final bit of self-erected fieldstone walls in 2000.

As a mentor to youth, Hugh volunteered for decades in the Boys & Girls Club of Chicago and as a baseball coach in Niles for John’s teams. He enjoyed pointing out that he and John achieved a “three-peat” by winning three straight league championships before Michael Jordan and the Chicago Bulls made the term famous. Upon moving permanently to Door County in 1999, Hugh co-founded and built the Boys & Girls Club of Door County, serving as the president of the board.

In retirement, Hugh was a faithful leader in Men’s Bible, Men’s Days of Reflection, and Christ Renews His Parish at Stella Maris Parish (formerly St. Rosalia Parish) in Sister Bay. Despite being diagnosed with Parkinson’s disease in 2009, he remained a fixture among his and Lee’s friends and the local community, including a good run of Irish luck at monthly poker games.

In 2011, he published his memoir of growing up on the south side of Chicago, Chicago Kid: From Whence I Came. He and Lee traveled throughout the world to visit their children and grandchildren, overcoming increasingly difficult physical limitations from the Parkinson’s with the grace of God and the ever-loving care of Lee.

Most of all, he loved his and Lee’s time in their home and on the land on Juice Mill Lane in Ellison Bay. Hugh’s faith and commitment carried him throughout life and exemplified his tenet that “dreams and people are worth fighting for.”

Hugh was welcomed home by his parents, Patrick and Margaret; his brothers, Patrick and Fred; and his sisters, Margaret and Kathleen.

His life will be honored with a mass of Christian Burial celebrated on Saturday, Feb. 22, 11 am, at Stella Maris Parish, 2410 S. Bay Shore Dr. in Sister Bay, with Fr. Ron Colombo as celebrant. Hugh will be laid to rest in St. Rosalia Cemetery.

“Our family would like to express our heartfelt thanks to Unity Hospice and the nursing staffs of Door County Medical Center and Good Samaritan Society-Scandia Village in Sister Bay for the compassionate care you gave to Hugh.”

Casperson Funeral Home in Sister Bay is assisting the family. Expressions of sympathy, memories and photos of Hugh can be shared through his tribute page at caspersonfuneralhome.com.