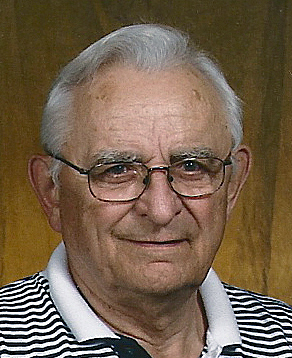 Hugo H. Klessig, 95, Brussels, peacefully entered eternal life at Bellin Memorial Hospital ICU Unit on Jan. 1, 2018. He was born Oct. 13, 1922, at the Kolberg Cheese Factory, the family home and business of his parents Arthur and Lucy Klessig. Hugo attended Brussels High School where he lettered in basketball his junior year and graduated in the Class of 1942. After graduation, he worked as a welder at Smith Ship Yard in Sturgeon Bay.  On Oct. 1, 1942, he married Mary Jane Mathy at St. Joseph Parish in Sturgeon Bay, she preceded him in death on Jan. 1, 2002.

In July of 1944, Hugo enlisted in the U.S, Navy completing his basic training in Farragut, Idaho.  Then he was sent to Treasure Island, Cali. before shipping out with the 7th fleet to the Philippine Islands.  He was given an honorable discharge from the Navy on March 1, 1946, as a Ship Fitter 3rd Class.  After returning home, he began working at the Algoma Plywood Corporation where he worked for 25 years.  While working at the Plywood he received many awards for his thoughtful suggestions on improving his workplace.  In 1976, he went to work for Palmer Johnson’s in Sturgeon Bay and retired from there in 1987.

While raising his family, Hugo worked part-time welding in his garage in the evenings for area farmers. He enjoyed woodworking, playing cards and watching the Packers. Hugo also enjoyed bowling with his friends at Curly’s in Duval and at the time of his retirement, his co-workers at P.J’s designed a special bowling ball with a plow attached.  He was a volunteer member of the B.U.G. Fire Department and was known for making the greatest “Old Fashions” of all times. He was a devoted husband and father who truly enjoyed watching his grandsons play in Door County League Baseball.

Funeral services will be held at 11 am Saturday, Jan. 6, 2018, at St. Francis and St. Mary’s Parish in Brussels with Rev. Edward Looney officiating. Entombment will be in the Shrine of Good Shepherd Mausoleum. Visitation will be from 4 – 7 pm Friday at the Forbes Funeral Home in Sturgeon Bay and from 10 am until time of services at the church on Saturday.  A prayer service will be held at 7 pm on Friday at the funeral home.

Our family would like to thank, Dr. Robert Anderson, Bellin Health Algoma, for his care for our father in the past several years. We would also like to thank the ER Staff who were present on January 31st as well as all other doctors/nurses/aides who were involved with Dad’s care during his brief stay at Bellin Memorial Hospital on New Year’s Eve and New Year’s Day. Your compassionate care for our father and family will never be forgotten.  A special thank you to our Father’s faithful friend, Ervin, for all the times he picked up dad for “Senior Breakfasts” and many other events with former classmates and friends.