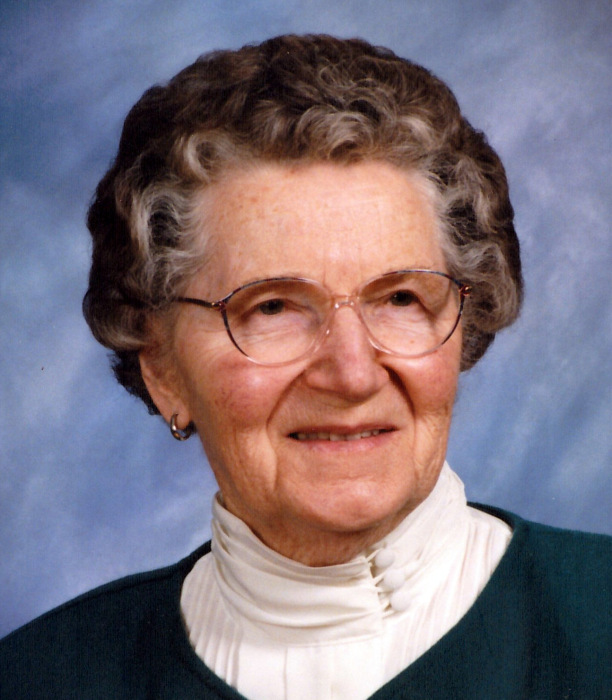 Irene Margaret Vertz, 95, of Sturgeon Bay, formerly of Jacksonport, was called Home to be with her Lord and Savior on Monday, December 21, 2015, while in the comfort of her home.

She was born January 25, 1920, in West Jacksonport, the daughter of Fredrick Karl Jonas and Esther Emily (Honold) Jonas. Irene graduated from Fairview Grade School in West Jacksonport and attended Sevastopol High School for one year. She lived and worked as a private housekeeper in Illinois and Milwaukee. Irene moved back home to Door County and was united in marriage to Roland John Fredrick Flok at Immanuel Lutheran Church in Baileys Harbor on September 20, 1941. Together, they owned and operated their dairy farm on Flok Road in Jacksonport. He preceded in her in death on April 20, 1970. Irene married Adolph Emil Vertz at Zion Ev. Lutheran Church in West Jacksonport on June 29, 1974. He preceded her in death on May 22, 2002.

Irene was an active member of Zion Ev. Lutheran Church where she helped with the Ladies Aid and sang in the church choir. She was also a member of the West Jacksonport Homemakers Club. Irene enjoyed gardening and tending to her flowers, making quilts for special occasions, reading both, religious and non-religious literature, and canning and baking. She cherished the time she was able to spend with her family, especially her grandchildren. Her faith was very important to her, and she loved her church. Irene was always willing to help others.

Funeral services will be held at 11:30 a.m., Wednesday, December 23, 2015, at Zion Ev. Lutheran Church in West Jacksonport with Pastor Peter Lindemann officiating. Burial will be in Bayside Cemetery.

Memorials may be given in Irene’s memory for Zion Ev. Lutheran Church and Zion Lutheran School.