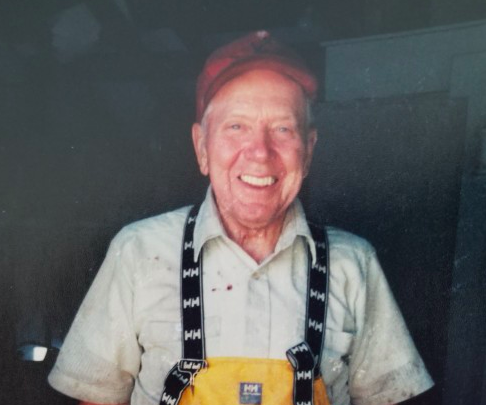 Jacob Benjamin Ellefson came into the world with a broken collarbone at the family home in Jackson Harbor on Washington Island, his nearly 11-pound birth weight having necessitated the procedure. He died Feb. 25, surrounded by loved ones, including his beloved wife of 29 years, Shirley, at their Townline Road home after a brief decline. His 92.5 years of life were characterized by love, faith, hard work, integrity, humility and humor.

He attended Jackson Harbor Elementary School and graduated from Washington Island High School. Immediately upon graduation, his father accompanied him (because he was just 17) to Green Bay to sign up for the military, allowing Jake to join his two older brothers serving in WWII. He was discharged from the Navy in 1946 as a Quartermaster Third Class.

As Jake said about each Islander whose eulogy he presented, “He had a wonderful childhood!” With three older siblings, one younger, cousins across the street and a best friend just around the harbor, there was no end of opportunity for fun – skiing and sledding in the winter, and swimming, baseball and row-boating all summer long! Jake grew up helping in his father’s fishery and loved going out with him on the boat from the time he was 10 years old. He remained a cross-country skier for most of his life (at least half that time on skis his father carved) and also enjoyed playing golf.

After returning from military service, Jake, Everett “Steve” and Klemmet “Kay” formed Ellefson Bros. Fishery. For more than 70 years, he was fortunate to work in an industry he loved. There was no better day for Jake than one he could spend on the lake.

Family was a source of great joy for Jake. He especially took pleasure in being a dad, grandfather (Bestefar) and great-grandfather – countless hours of ball-playing with his young sons and cooperative work projects with them and their sons as they reached adulthood. Family trips, picnics and parties on the fish tugs. Untold nights reading bedtime stories, playing games and faithfully checking for monsters in closets. Jake estimated that he swung the sledge hammer 30,000 times during the summer he drove the posts for Melodie’s horses’ running pen (and noted that there is a lot more rock than soil on the East Side).

He was supportive of whatever activities his kids took on and wrote, “My children have been a sheer delight to me!” Jake’s devoted interest, concern, support and advice characterized latter-year interchanges together with uncountable games of “Ellefson Family Dealer’s Choice” and Jake’s signature, “Read ’em and weep!” when smacking down what he knew was the winning hand.

He was a lifelong member of Trinity Evangelical Lutheran Church, where he was baptized and confirmed. Jake served twice as president of the congregation and several times as deacon, trustee and council representative. He was a member of American Legion Post #402 for more than 70 years and was instrumental in shoring up the current Legion building so it could be used as a headquarters. Jake served for more than 50 years on the Washington Island Community Center Committee and for 25 years on the board of the Electric Cooperative.

Jake loved learning and was enthusiastic about obtaining new knowledge. He believed a strong educational program was essential for the Island and served on the school board when the new school was being planned and designed. He helped them stay on budget by supporting the use of island craftsmen.

Jake was an ardent baseball fan and loved the years when first he, then his sons, played on the Island team. Regardless of who was playing, though, he was sure to be in the stands! Jake was very proud of his Norwegian heritage and a highlight of his life was traveling with his wife, as well as his siblings and their spouses, to Iceland and Norway. He very much enjoyed visiting his cousins and seeing where his father grew up. It was a special pleasure for him in fall of 2017 when cousins from two branches of the Norwegian family were able to visit the Island.

Jake loved to laugh, and his humor was regularly borne out by the twinkle in his eye and the unique humorous exchanges he enjoyed with family, friends and members of the island community.

He was preceded in death by his parents, Jacob and Grace; sister Martha (husbands, Don Hagen and Milton Dulong); brothers, Everett (Genevieve) and Klemmet Ellefson; and three nephews and other relatives.

A celebration of Jake’s life will be held at 11 am on Saturday, July 20, 2019, at Trinity Evangelical Lutheran Church on Washington Island, with Pastor Alan Schaffmeyer officiating. A luncheon with a time for personal reflections, songs and tributes will follow in the church fellowship hall. Visitation will be held at the church on Saturday, July 20, from 10 am until the time of the service.

Casperson Funeral Home and Cremation Services in Sister Bay is assisting the Ellefson family. Expressions of sympathy, memories and photos of Jacob can be shared with his family through his tribute page at caspersonfuneralhome.com.