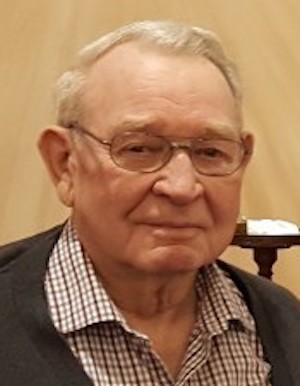 He was born January 27, 1938 in Sturgeon Bay, the son of the late Edwin and Vera (Schuster) Ash. Jim graduated from Sevastopol High School in 1956, then attended UW-Madison Farm Short Course in 1957. On May 16, 1959 he married Karen L. Gilson at Zion Ev. Lutheran Church in West Jacksonport. Jim worked as a milk truck driver for Carl Urban for five years; drove school bus for Sevastopol School for five years; and Midwest Breeder (then GenX and now CRI) for 38 years as Artificial Inseminator, retiring in 2003. He then worked for Door County Parks part-time for eight years.

Jim enjoyed attending all his grandchildren’s events, hunting with family and friends, and watching Westerns.

Funeral services will be held at 11:00 a.m. on Friday, July 13, 2018 at St. John Ev. Lutheran Church in Valmy with Pastor Benjamin Enstad officiating. Burial will be in Zion Ev. Lutheran Cemetery in West Jacksonport.

Jim was a devoted family man whose sense of humor and community spirit will be missed by all.

Memorials may be made in his memory for St. John Ev. Lutheran Church in Valmy.