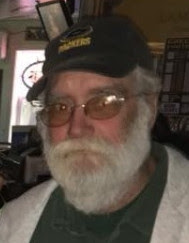 James “Grizzly” Allen Adams, 67, of Sister Bay, died in the comfort of his home, late Friday night, August 19, 2022 with his partner in life, Andrea Erickson, at his side.

He was born January 10, 1955 in Racine, the son of Trulon York Adams and Marian Jean (Collins) Adams. Jim grew up attending St. Edward Parish in Racine and attended Washington Park High School in Racine with the class of 1973. He was initially employed with Racine Boiler and Tank as a stainless steel welder. Jim met Andrea Caye Erickson at Olde Ellison Bay Days. He went to work as a carpenter for Carlson-Erickson Builders out of Sister Bay, which Andrea’s father owned, in the early 1980s and remained with them until the early 2000s when (Jim’s) health prevented him from working.

Jim bowled in league at Sister Bay Bowl and shot trap at the Peninsula Gun Club in Juddville. He was an outdoorsman who enjoyed fishing with Tyler on Kangaroo Lake in Baileys Harbor as (Tyler) was growing up and deer hunting together. Jim taught himself how to play the guitar and loved playing on his old-school Gibson. When it came to cooking, he was a “master on the grill.” Above all, Jim loved his family and spending time with his granddaughter and nieces and nephews.

Jim was preceded in death by his father; and other relatives.

Arrangements are pending for Jim’s life to be honored with memorial service that will be private for family.

“Our family would like to express a special thanks to the staff of Door County Medical Center in Sturgeon Bay and St. Mary Hospital Medical Center in Green Bay for their wonderful, compassionate care given to Jim.”

Casperson Funeral Home & Cremation Services in Sister Bay is assisting the Adams family. Expressions of sympathy, memories, and photos of James may be shared with his family through his tribute page at www.caspersonfuneralhome.com.