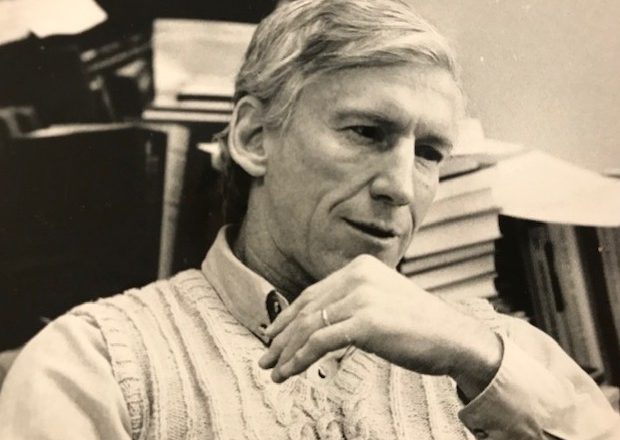 He was born in Plymouth, Wisconsin, to the late Carroll George and Lillian Augusta Wilhilmena (Leverenz) Rock and grew up on their dairy farm with his older brother, Carroll.

From his start in a one-room schoolhouse, Jim went on to earn an undergraduate degree in geography and a master’s in rural sociology from the University of Wisconsin and his doctorate in economics at Northwestern University.

His reasons for transferring to Northwestern for his PhD weren’t entirely academic, as he had begun pursuing his future wife, Bonnie Brown, who studied there. Their long and romantic union — they wed in 1962 — was a great example to their children and grandchildren. It could be said that his love for Bonnie was his most salient characteristic.

Jim worked in the U.S. Department of Agriculture and for the CIA before becoming a professor. In 1967, he began teaching in the economics department at the University of Utah, where he served as chair of the department for several years and earned many teaching awards. His academic interests ranged from the aluminum-cookware industry to Holstein cattle, and from the national debt to a lifelong enthusiasm for the work of John Maynard Keynes.

His career was marked by devotion to his students, with special interest in and responsibility to those less fortunate.  He helped set up the Alberta Henry Foundation’s scholarship fund for the disadvantaged and served as a board member and treasurer for the Salt Lake City NAACP.

A devoted father, Jim will be remembered for reading aloud, coaching soccer and building many dangerous balance beams in the woods of Door County, where he spent his summers and where he moved year-round upon his retirement from teaching. He loved cows and radishes and was an enthusiast full of exclamations.

Jim’s life will be honored with a memorial service held Thursday, August 8, 10 am, at the Unitarian Universalist Fellowship, 10341 Water St. (Hwy 42), Ephraim, WI 54211. Burial will be in the Ephraim Moravian Cemetery.

Casperson Funeral Home and Cremation Services of Sister Bay assisted the Rock family with initial care. Expressions of sympathy, memories and photos of James can be shared through his tribute page at caspersonfuneralhome.com.