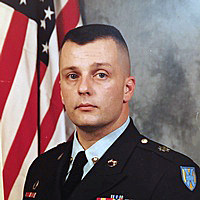 Sergeant James Robert Janda, 48, of Sister Bay, died at home Monday, January 15, 2018.
Jim is survived by the love of his life, his wife, Tracey L. (Schernig) Janda, son Nicholas, daughter Jamie (Anthony), mother Phyllis, father James (Andrea), brother John (Donna). He is also survived by his mother and father-in-law, Sandra and Bruce Schernig, sister-in-law, Barbara (Joe) LeBlanc as well as aunts, uncles, cousins, nephews and grandsons.
Jim was born in Melrose Park, Ill. and grew up in Westborough, Mass. Before enlisting in the U.S. Army, Jim worked for many years as a mechanic for Colonial Volkswagen (formerly Roy Rioux VW) of Westborough. On Sept. 11, 2001, Jim joined the U.S. Army serving in the military police. Jim was a great friend, father, husband, soldier and Non Commissioned Officer. He deployed twice to both Iraq and Afghanistan, placing the needs of his country above his own and those of his family. He was a true patriot who believed in helping others and never turned down a friend in need. After relocating to Sister Bay, Jim worked for the village of Ephraim and HideSide LTD. He was also a volunteer firefighter for the Ephraim Fire Department.
To say that Jim lived a full life is an understatement. The lives he touched span the globe. He will be dearly missed by his family, friends, and soldiers of the U.G.L.Y. Platoon.
Calling Hours will be held at Casperson Funeral Home, 10710 North Bay Shore Drive, Sister Bay, WI 54234 on Jan. 26, 4-6 pm, followed by a private memorial service for the family.
In lieu of flowers, donations to Sergeant Janda’s memory may be made to the GoFundMe account at gofundme.com/jimsergeant-janda-memorial-fund. The fund was set up by the soldiers with whom he served to help with his memorial service.