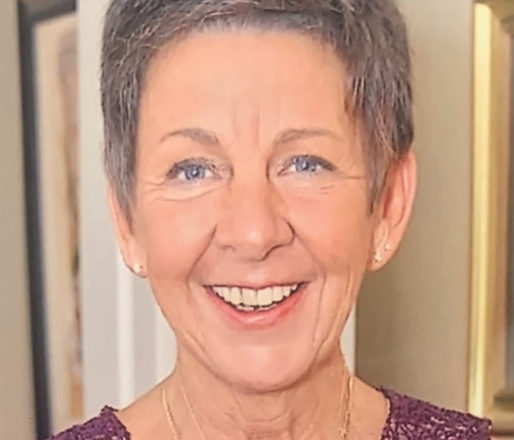 Jan Resler died on September 28, 2020 and was greeted at the rainbow bridge by her many beloved dogs but especially Foster, Amstel, and Blatz.

Jan was born on April 25, 1955, Jan was the only child of Priscilla (Carmody) and Lester Meyer in Sturgeon Bay where Jan lived most of her life.  Jan is survived by her patient, kind saint of a partner, Joe Riederer, her only child Dirk Resler, his wife Rachel Resler and precious grandchildren Kolby and Madelynn, special cousin Kevin Carmody and sons Sean and Danny and many lifelong friends and dog friends.

Jan worked in both clinical and hospital settings for 45 years as a medical technologist in Green Bay, Sturgeon Bay and Savannah, Georgia.  Recently she enjoyed grooming dogs of all shapes and sizes for over 10 years.

Introduced at a very early age to the world of both show and field Golden Retrievers by her breeder father, Lester, he sparked her lifelong interest in the competitive dog community traveling far and wide within the United States and Canada handling her beloved Wirehaired Pointing Griffons Amstel, Budel, Blatz and Hamms to both show and field titles among many other performance titles.   Nobody racked up more miles on their vehicles than Jan.  Jan won the 2013 American Wirehaired Pointing Griffon Association’s National Specialty with her first Griffon, Amstel, and on multiple occasions competed at the prestigious Westminster Kennel Club Dog Show in New York as well as the American Kennel Club’s National Championship in Orlando, FL.

She was a most beloved friend of both the dog show and hunt testing communities bringing her great spirit of competition and fun-loving ways to those venues.  A fierce competitor, Jan always won and lost with grace.  At a dog show she was a striking character with her short, spiky hair, her long-legged stride and the bright pantsuits that were her signature.  In the field as either competitor or AKC judge, she rocked blaze orange and her camouflage onesie.

Like her dogs, Jan never met a stranger.  Whatever their walk of life, whether it was a local friend or a celebrity in New York City, her talkative, endearing manner quickly made people feel at ease and they now had a friend for life.  She was the life of the party bringing fun to any social situation where she made all people feel at ease and accepted.

Jan worked to establish various programs in her communities that supported youth involvement.  She was very dedicated to the sailing communities of Sturgeon Bay and especially Savannah, GA where she helped to establish and grow high school sailing as a competitive sport.  On her feet she frequently wore either Sperry’s or duck shoes.  She served on the board of directors for the Door County Rod and Gun Club spearheading, with others, the Door County Youth Trap League.  She was an active member and served on the board of directors and various committees of the American Wirehaired Pointing Griffon Assciation.

Friends may call at the Forbes Funeral Home on Friday, Oct. 2, from 4:00 – 7:30 pm.  Private family services will be conducted by Rev. Cory Dahl.  Memorials may be directed to the Youth Trap League/Door County Rod and Gun Club https://www.doorcountyrodandgunclub.com/activities/trap-league/youth-trap-league/   or to the Sail Training Foundation https://www.sailtrainingfoundation.com/about-us/history-of-sail-training-foundation/