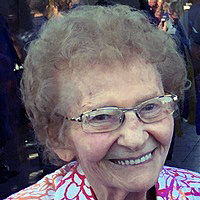 Janet Lucille Krause, 89, died peacefully at her home in Fish Creek on Jan. 4, 2018. She was born June 19, 1928 in Green Bay and was adopted shortly after by George and Emma (Grovogel) Beyer of Fish Creek. Janet graduated in the Class of 1946 at Gibraltar High School.

On January 17, 1948, she married Alvin (Itsie) Krause (who became the love of her life) in Baileys Harbor at the old parsonage. Together, they raised eight children, enjoying what northern Door County had to offer.

Janet and Itsie owned a variety of businesses throughout their marriage, which include Beyer’s Cottages (Edge of Park), Red Owl Grocery Store (On Deck), Dreamland Motel (Julie’s Park Cafe and Motel), Fiesta Restaurant (Fish Creek Grill), Edgewater Motel, Lang’s Resort (Old Post Office Restaurant), and 57 Depot. In addition to being an entrepreneur, she was a founding member of the Fish Creek Civic Association, member of the Fish Creek Women’s Club, and Fish Creek homemakers. Throughout her busy yet fulfilling life, she remained strongly devoted to her family and friends.

Her hobbies included gardening, cooking, and spending lots of time with her family, which was her most treasured endeavor of all.

A visitation will be held at Stella Maris in Sister Bay on Jan. 11 from 4-7 pm.

Continued visitation will occur on Jan. 12 from 10-11 am at Stella Maris in Sister Bay, and funeral services will follow at 11 am, with a luncheon after the mass. Anyone who would like to attend the the burial ceremony at Blossomberg Cemetery at 2:30 is welcome.

In lieu of flowers, contributions will be made in Janet’s name to the Eagle Tower Fund and the Janet and Alvin Krause Scholarship.

Casperson Funeral Home in Sister Bay is assisting the Krause family with arrangements.

The Krause family would like to give a special thank you to Leanne Cruz for her endless dedication and loving care for Janet the past few years.

Moreover, the Krause family would like to thank the wonderful staff of Unity Hospice, Becky Nash, Pastor Frank of St. Paul Lutheran Church, Casperson Funeral Home, Father Dave of Stella Maris Parish, and all of the love, support, and words of gratitude from dear friends, the loving Door County community, and beyond.