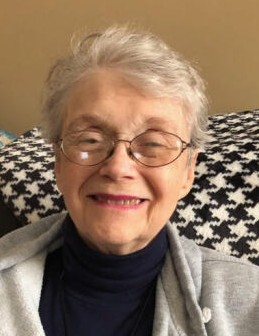 She was born July 1, 1942 in Sturgeon Bay, daughter of the late Russell John Godfred and Elsie Murtle (Wickman) Lundquist. Janet graduated from Gilbraltar High School with the Class of 1960. She worked as a receptionist for the Children Service Society of Green Bay before moving back to Door County. She then worked at Ephraim Shores, first as a waitress then as a receptionist. On June 4, 1977, Janet was united in marriage with Keith “Dan” Noe at Trinity Lutheran Church, spending 42 years of marriage together before he preceded her in death on October 15, 2019. She was a member of the Moravian Church of Sister Bay. She enjoyed music, playing guitar, sketching, and painting, and playing cards with her women’s group while she was still able. Most of all, she loved spending time with her family.

She was preceded in death by her parents, Russell and Elsie Lundquist; husband, Dan Noe; sister, Lois Carmody; and brothers, Glen, Duaine, and Richard Lundquist.

Those in attendance of the visitation and/or funeral service are to wear face masks and maintain social distancing. Dual-chapel occupancy of 25% capacity will be allowed (total of 50 between the two chapels).

Janet’s family wishes to extend a heartfelt thank you to the staff at Anna’s Healthcare and Unity Hospice for their compassionate care shown toward Janet.

Expressions of sympathy, memories, and photos of Janet may be shared with her family through her tribute page at www.huehnsfuneralhome.com.