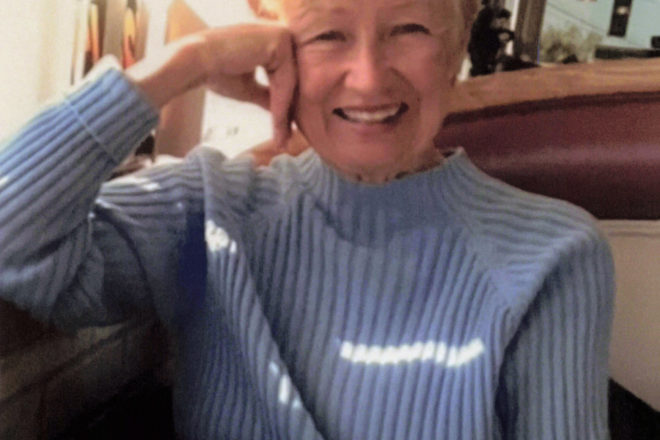 Jean Elizabeth Dieterich, 85, died on Monday, May 30, 2022 at Good Samaritan Society – Scandia Village in Sister Bay, where she resided for the past two and a half years.

She was born August 8, 1936 in Evanston, Illinois, daughter of the late Anton Fredrick and Mildred (Perry) Williams. After her father’s passing when Jean was nine, her mother married Stu Brown, who raised Jean and her sister. The family settled in Des Plaines, IL, where Jean attended Maine East High School. She worked as a secretary in Chicago and took the train into the Loop daily.

Jean married Arthur Carl Dieterich on May 30, 1959 and hung up her high heels to become a full-time wife and mother. Sandy was born September 11, 1960 and the twins, Danny and Larry, were born on September 15, 1961. Jean loved being a mother, she had lots of energy and liked to have fun with her kids. She always had the three of them in tow, going shopping, stopping at McDonald’s, visiting Art at the firehouse, and several other activities. The four could never visit a pet store without bringing home a new family member. Jean was president of the PTA and was a Cub Scout and Brownie leader. While the kids were growing up, their summers were spent in Door County. She and Art enjoyed socializing with their friends and going on many fun vacations together. Jean was always up for an adventure! She was an amazing first mate to Art, while they traveled on their boat. The couple moved to Fish Creek permanently three years ago. She had four grandchildren, who she loved and enjoyed while they were growing up. They all had great times and great memories were made. Her smile brought a smile to everyone around her.

She was preceded in death by her parents and sister, Joan.

A graveside service to honor Jean’s life will be held on Saturday, June 11, 2022 at 11:00 a.m. Blossomberg Cemetery in Fish Creek.

The family wishes to extend a heartfelt thank you to the staff at Scandia Village, who became family.

Memorial donations can be made in Jean’s name to the Alzheimer’s Association.

Casperson Funeral Home & Cremation Services of Sister Bay is assisting the Dieterich family. Expressions of sympathy, memories, and photos of Jean may be shared with her family through her tribute page at www.caspersonfuneralhome.com.