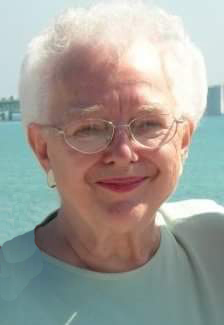 Jeannine Anne (Jorgenson) Toppe-Eggert, 86, of Sturgeon Bay, passed away peacefully in her sleep at home on July 4, 2018.  She was born in Maplewood, WI on September 29, 1931 to Elden & Lauretta (Fischer) Jorgenson.

She moved to Sturgeon Bay in 1937 and went to the old Sawyer School and the old Sturgeon Bay High School, graduating in 1949.  Her first job was at the original Palmer Johnson’s by the bridge as a receptionist/bookkeeper.

Jeannine worked for Dr. Ronald DeMark, Dr. Walter Norris, and Steven Morris all optometrists in Marquette. She also worked at N.W.T.C in Sturgeon Bay and happily returned to Palmer Johnson’s, retiring in 2000.  She was a lifelong and very active member of St. Peter’s Lutheran Church and WELS.  On September 21, 2002, she married Paul Eggert.  He passed away in 2005.

Funeral services will be 11:00 a.m. Saturday, July 7, 2018, at St. Peter’s Lutheran Church in Sturgeon Bay.  Burial will be in Mt. Olive Cemetery.  Friends may call at the church on Saturday from 9:30 a.m. until the time of service.  Forbes Funeral Home is in charge of arrangements.  Memorials may be directed to St. Peter Lutheran School, Mt. Olive Cemetery, or a charity of your choice.