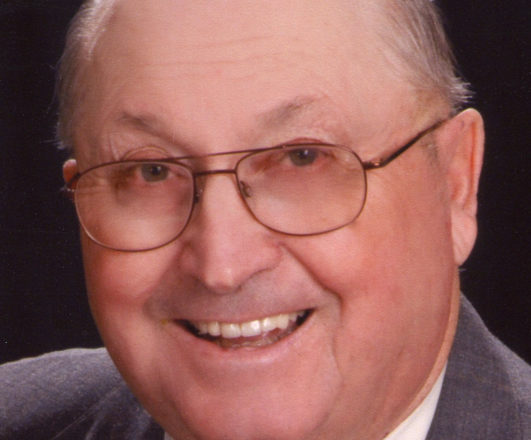 Jocko graduated from Sturgeon Bay High School in 1951. There he excelled at baseball and basketball, despite his stature. After high school, he enlisted in the U.S. Navy and served his country during the Korean War. Following his time in the service, Jocko attended barber school, then joined his father working in the barber shop until the late 1960s.

In 1970, he began his insurance career with Rural Insurance and eventually went to work for the Schopf Insurance Agency, which later became Stoneman-Schopf Insurance. During his career, Jocko developed a solid reputation for superior customer service, often going above and beyond in advocating for his clients. He was the recipient of numerous awards and recognitions and kept his license up until he was 86 years old.

Jocko will be remembered as one of Door County’s great sports enthusiasts. When he was young, he was a standout in the Door County Baseball League, eventually being inducted into the Door County Baseball Hall of Fame in 1992. For many years, he served on the league’s board in numerous positions. When he finished playing, he became a permanent fixture in the stands as a spectator and supporter of the league, known and admired by generations of baseball players and fans.

Playing golf was probably Jocko’s greatest passion. For decades, he organized numerous leagues and tournaments. His social skills and love for the game led him to establish and host his own tournament, the JR Senior Scramble. People may also remember that Jocko wrote a sports column for the Door County Advocate and also had a radio show on WDOR, reporting golf scores and news. Anyone who golfed knew Jocko!

Jocko loved all sports and enjoyed following both professional and local sports teams. He was even inducted into the Door County Bowling Hall of Fame. In addition to his interest in sports, Jocko was a longtime faithful member and usher at St. Peter’s Lutheran Church, and a past member of the Sturgeon Bay Jaycees. Jocko was definitely one of a kind. He had a great love for life and people and always had a smile on his face while visiting with anyone, anywhere. He will be dearly missed by all who knew him.

Funeral services with military honors will be conducted on Saturday, Nov. 23, 12 pm, at St. Peter’s Lutheran Church, with the Rev. Joel Sauer officiating. Burial will be in Schumacher Cemetery. Visitation will be at Forbes Funeral Home in Sturgeon Bay on Friday, Nov. 22, 3-7 pm; and at the church on Nov. 23, 10 am – 12 pm. To celebrate Jocko’s love of sports, everyone is invited to wear their favorite sports apparel to both the visitation and the funeral. In lieu of flowers, a memorial fund has been established in his name.

Special thanks to the nurses and staff on the seventh floor at St. Vincent Hospital, Dr. Kendra Marsh-Kates, Dr. Kelton Reitz and his nurses Lucy and Danielle for the wonderful care and support.