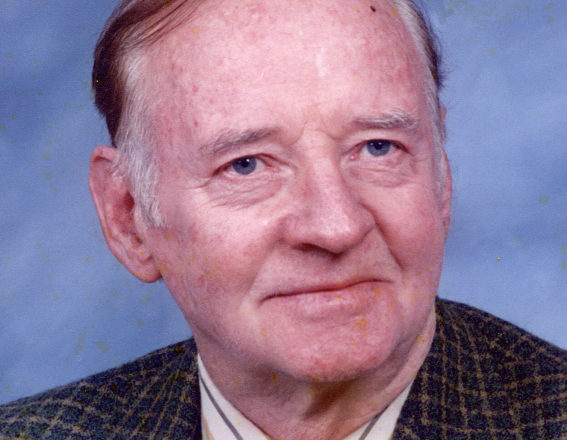 Jerry died after living 85 years in the same home where he was born. His parents were Edward and Clara (Olson) Viste, who lived on the family farm that was homesteaded by his great grandparents, Ole (tinsmith) and Marit Christianson, in Nasewaupee Township, Door County. There were six children born into this family: twins Joyce and Fern, Clyde, Donald and Ardis, who all preceded him, plus Jerry, who was the last of this generation.

Romy, as the family called him, grew up with older brother Don and sister Ardis at home with their parents during the late depression and WWII, when there were many challenges that had to be addressed. He attended Thrift School (local one-room), where his interest in music began; and Sturgeon Bay High School, graduating in 1951; then enrolled in Milwaukee School of Engineering. Relatives convinced Romy to become a teacher instead, and he began studies at Door Kewaunee College, graduating in 1953. He began his teaching career in another one-room school with 49 students in all eight grades and continued until called for the draft in 1956. His military career was with the Army in Colorado and Germany as chief clerk in 8th Infantry Division Headquarters, G3 Section.

After a farm accident took brother Don’s life in 1957, Jerry returned home on a dependency discharge from the Army to operate the family farm along with his parents. During this time, his interest in music increased, and he again became involved with the church choir and organ music.

He married Jeannine Ahlers in 1958 and bought the family farm. His community service began with his appointment to the Federal FmHA lending board, serving for six years, then the County ASCS (now FSA) for 10 years, and the County Land Conservation Committee for nine years. Farm additions brought the total land to 400 contiguous acres, along with a cherry orchard, and family additions brought three sons and two daughters. During this time, Jerry was also a dealer for farm (barn) and material-handling equipment, and built a replica 1937 Jaguar SS100, the “little red car,” which the family enjoyed.

He served as a trustee for Tanum Church, on the cemetery board, and as the choir director for several years. In celebration of the 200th anniversary of our country, Jerry wrote and conducted a musical, Tribute to America, which the Tanum Forest Church Choir presented at six locations during the 1976 year. He also assembled a collection of Hammond organs, which he was restoring, and he enjoyed playing whenever there was free time or a willing listener.

In 1980, the family was asked to conduct permit testing on the farmland for an ash-disposal site (dump) for a proposed power plant to be built on the WPS property at the canal. The offer was declined, and Jerry began a crusade to halt the plans, forming a corporation and joining forces along with the Door County Environmental Council and other groups to end those plans.

The plan for the plant was dropped, and Jerry began another career as executive director of the Environmental Council (DCEC), which continued for 34 years, when he retired from the position in 2014. He retired from dairy farming in 2001 and sold the farm to his son Gregg in 2002. Jerry continued to live in the farmhouse, working on his biography, It Wasn’t So Bad; and a second book, The Little Red Schoolhouse, both soon to be published.

Services with military honors will be conducted Monday, Dec. 2, 11 am, at Tanum Forest Lutheran Church, with the Rev. Peter Mannoja officiating.  Burial will be in the Tanum Cemetery.  Visitation will be Sunday, Dec. 1, 4-7 pm, at the Forbes Funeral Home; and Dec. 2, 10-11 am, at the church.