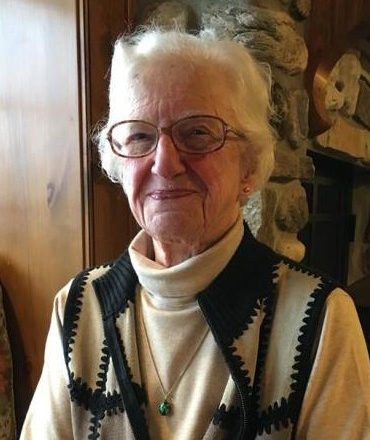 Joan was born to Otis and Clara (Kvasse) Aamodt in Minneapolis, the third of their four daughters.

She graduated from River Falls High School and continued her education at the University of Wisconsin-River Falls. Joan graduated from West Suburban Hospital School of Nursing in Oak Park, Illinois.

On October 25, 1947, she married J. William Draeb in Oak Park, Illinois.  They first met while at the Pine Resort in Idlewild, where Joan was employed during the summer months. Together they operated Draeb Jewelers in Sturgeon Bay. They had three children: Karen Marie, Elizabeth Lydia and George William.

She worked at Door County Memorial Hospital in extended care for many years before taking a job at Bay Ship in its medical department. Joan was an avid knitter and weaver, and she enjoyed playing bridge. Joan was a member of Bay View Lutheran Church.

Her life will be honored with a funeral service held at 2 pm on Wednesday, June 5, at Bay View Lutheran Church in Sturgeon Bay. Burial will follow in Bayside Cemetery.

Friends may call at the church on Wednesday, 1-2 pm.

In lieu of flowers, memorials may be made in Joan’s name to Bay View Lutheran Church or the Peninsula Symphonic Band.

Huehns Funeral Home is assisting the Draeb family. Expressions of sympathy, memories and photos of Joan can be shared through her tribute page at huehnsfuneralhome.com.