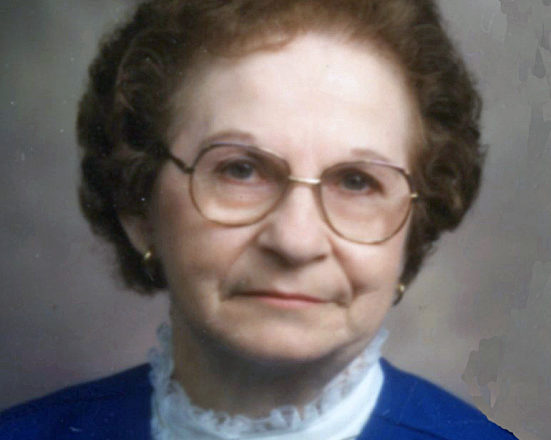 Joanna (Schmelzle) Stephan, 95, of Sturgeon Bay, died Sunday, June 4, 2017 at Pine Crest Assisted Living in Sturgeon Bay. She was born June 20, 1921 in Maplewood, WI, the daughter of the late John and Augusta (Brey) Schmelzle. She graduated from Sturgeon Bay High School and then worked at Leathem Smith Shipbuilding as a secretary in the first aid office. Joanna also enjoyed employment at Harmann Studios in Sturgeon Bay and Bunda’s Department Store.

On September 16, 1943, she married the Honorable Judge Edwin C. Stephan and was happily married to him for over 60 years until his death in 2009. Joanna was a member of St. Joseph Catholic Church, the Catholic Daughters, the Hospital Auxiliary, and many bridge clubs.  She was a kind, loving mother, grandmother and great-grandmother who dedicated her life to her family and the community.

She was preceded in death by her husband Edwin Stephan, her parents and her parents-in-law Walter and Marie Stephan.

Funeral services will be 10:00 AM Saturday, June 10, 2017 at St. Joseph Church with entombment in St. Joseph Mausoleum.  A rosary by the Catholic Daughters will be prayed at 9:15 AM that morning.  Friends may call at the church on Saturday from 9:00 AM until the time of mass.  Forbes Funeral Home is in charge of arrangements.

Special thanks to all the staff at Pine Crest for of all their extremely, loving good care, along with Unity Hospice and Home Instead Senior Care. In lieu of flowers, memorials may be directed to St. John Bosco School, Sturgeon Bay.