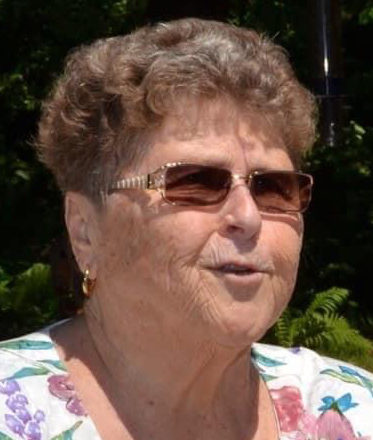 Born on March 8, 1938 to Frank and Marie Kohlbeck, Joanne was the fifth of seven children.  She married Loney F. Teich on November 29, 1958 at Corpus Christi parish in Sturgeon Bay, and said goodbye to Loney upon his death in 2012, after almost 54 years of marriage.

Joanne – or “Smokey” to many who knew her – had a long career at Knaapen Bakery while she and Loney raised their five children on Joliet Avenue in Sturgeon Bay.  There, they taught life’s most valuable lessons, including the importance of love, faith, family and friends, the joy to be gained from a well-tended garden and crowded birdfeeders, and the secrets to the best poppy seed cake ever to grace a dessert table.

She was hilarious without effort, prompting many to comment over the years that she was one of the funniest people they knew.  Joanne graced anyone and everyone she encountered with her humor – and unfiltered opinions.  Frankly, she was often downright sassy much of the time, and got away with more than her fair share, likely because of her sparkling blue eyes and warm smile.

And if you’re looking for a “grandma” role model, look no further than Joanne.  Whether playing card games, trying to guess the ending to every Hallmark movie within five minutes of the opening lines, cooking hot dogs and popcorn over an open fire, enjoying the occasional Brandy Alexander, or gathering for home-cooked meals around her cozy kitchen table, Joanne was always creating memories with her grandchildren, Kayla, Melissa, Marcus, Lucus, Meghan, Ben and John.

Joanne’s family thanks the staff at Door County Medical Center Skilled Nursing Facility for taking such good care of Joanne, especially when COVID-19 prevented family visits.  They would be grateful for any memorial gifts to be directed to the Door County Medical Center Foundation for the Skilled Nursing Facility, so they can continue to provide excellent care to so many others.

Due to the continuing pandemic, Joanne’s family will have a private service and burial.