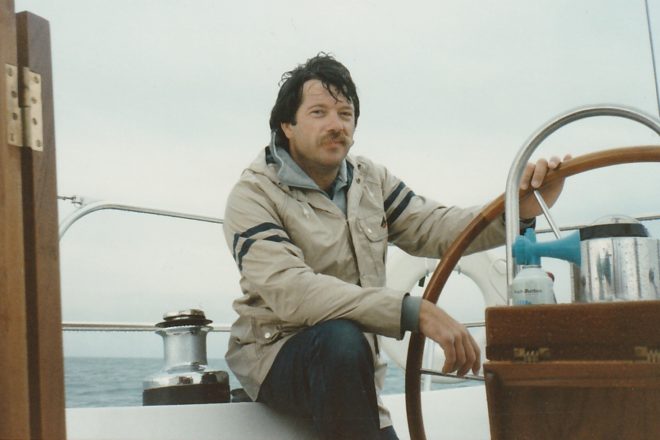 John was a man of multitudes.  A self starter, precise and detailed.  He was by way of land, sea and sky…Captain John of the Palawan, publisher of the Kolb Newsletter, Grand Champion Ultralight of the 1990 Oshkosh EAA Convention, owner of Skyline Graphics.

In John’s last moments, he bonded with his children, set his house in order, and reflected on his journey.

It was important to John that he left words of gratitude to the Shriners Hospital for Children, where he received treatment for Polio as a young boy.  Also, to the Minnesota-Wisconsin Collie Rescue for all they do, and for connecting him with his collies.  John cared very deeply for all of his companion dogs: Buddy, Skeezix, Shadow and Gracie.  To all those who were a part of John’s life, especially Pastor Steve who was there any time he needed encouragement, we thank you.

John will be remembered and greatly missed.

On clear days, we can think of him, as he once quoted, “ taking his airplane to an altitude of 10,000 feet, and cutting the engine, only to let it touch its gliding roots.” We trust that John is now on his ultimate flight in heaven with Jesus!

John was predeceased by his parents, Francis (LeClercq) and Jean (Aubin), and his brother, Noel (LeClercq).  He is survived by his three children, Teresa (LeClercq), Kathy (LeClercq), and Ian (Likwarz), his brother, David (LeClercq), his aunt, Carol (Paul) and his cousins, Dan (Marks) and Jeff (Marks).

For condolences and about John’s life, please visit: www.simplycremationgb.com