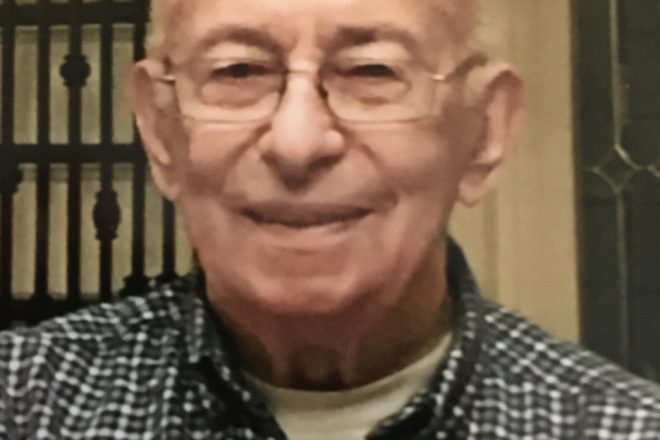 John “Jack” Dempster died on December 12, 2020, after a short stay in Algoma Long Term Care. Jack moved to Sturgeon Bay in 2011, along with his wife, Julie, to be closer to his first grandchildren. Prior to moving to Sturgeon Bay, Jack and Julie lived in Royal Oak, Michigan for nearly 40 years.

Jack was born in Little Falls, NY, on September 11, 1932, to Stella and John Dempster. Although Little Falls is a lovely upstate NY community, he couldn’t wait to see the world. He enlisted in the Air Force during the Korean War, with basic training at Lowry Air Force Base in Denver before being stationed in Okinawa at the Kadena Air Force Base as a camera repairman in the 19th Bombardment Wing.

Jack fell in love with Colorado during basic training and thus returned to Boulder upon his honorable discharge from the Air Force.  He went on to get a bachelor’s degree in Chemistry from the University of Colorado.

In Little Falls, he had been developing his skills in bowling, and continued knocking down the pins on the CU bowling team, helping them win many tournaments, many as Captain of the Bowling Team.  He passed along his love of the game to his children, who marveled at how he could hook the ball right into the pocket!

After graduation from CU in 1960, Jack started his career with the Food and Drug Administration as a Chemist in Denver, CO. He was promoted to the Los Angeles District as a Supervisory Chemist in 1968 and promoted again in 1972 to Detroit as the Director of Compliance Branch. He retired in 2003 from Detroit as Director of Investigation Branch. He was quite proud of his work with the FDA and developed many lifelong friendships with his coworkers. He always looked forward to retiree gatherings, especially at Thai restaurants.

Jack met Julie Hagmann at the CU campus in Boulder, Colorado when she applied to work at the Student Union. She was the first female allowed to work in the games area. Jack would remind us that he was grateful that his vote to not hire Julie was vetoed by every other employee. They married on July 29, celebrating 59 years together this past summer.

Jack spent his early retirement years as a Volunteer at Royal Oak Beaumont Hospital as a patient escort and 4 days a week delivering Meals on Wheels, before moving to Wisconsin. He continued to work at Meals on Wheels in Sturgeon Bay until health issues caused him to discontinue.

Jack had a love of Big Band music, dancing the jitterbug, especially to Glenn Miller’s, In the Mood, as well as all things Polish and pastry! He had many specialty recipes that he loved making for his family and that will continue to be enjoyed in his honor, most notably his famous caramel corn that would get shipped to friends and relatives across the country. His family will continue to make his delicious Dzia Dzia (Polish for Grandfather) Eggs on Christmas mornings. He also had a joke for any occasion, many of which were a bit off color.

Jack is survived by his wife, Julie; his children, Dorene Dempster (Mark Herrell), Robin Stephens (Bill), and Greg Dempster (Kate Chapman); as well as grandchildren, Mark, Samantha, Callan and Keira. He is also survived by his sisters, Lucille Shepardson of Little Falls, NY and Joyce Hogan of Albany, NY; as well as many nieces and nephews.

Huehns Funeral Home, Inc. & Door County Crematory LLC of Sturgeon Bay are assisting the family. Expressions of sympathy, memories, and photos of Jack may be shared with his family through his tribute page at www.huehnsfuneralhome.com.