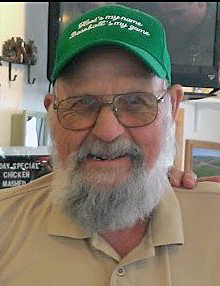 John Joseph Utnehmer, “Hoot” to all who knew him, formerly of Sturgeon Bay, died late Wednesday night, Jan. 3, 2018 at the Wisconsin Veterans Home at King where he had been living in recent years. He was 77. John was escorted out of MacArthur (Residence) Hall at King that night with “Code Red White Blue” final honors.

He was born May 11, 1940 in Antigo, the son of Oscar John Utnehmer and Virginia Ann (Schmidt) Utnehmer. John attended Sacred Heart Seminary from eighth grade through his freshman year and then returned to Antigo High School for the duration of his secondary education. Upon his graduation, he enlisted to serve his country with the United States Marine Corps. John served in Japan on two tours, helping in an orphanage and (of course) teaching the children how to play baseball. He became quite fluent in Japanese.

John was employed as an oil specialist and delivery person with the Door County Co-op in Sturgeon Bay for over 20 years.

For more than 50 years, Hoot devoted his life (easily 50-60 hours a week) to coaching youth football, baseball, and basketball. Whether it was making sure your football pads and helmet fit just right, to restringing your baseball glove or sometimes finding players cleats to wear, to picking up and dropping off the Maplewood boys (and players from all over Door County) whose parents were working during the time before and after practice, to listening to each and every single player’s account of the game, to helping you with your free throws, Hoot was always there. When you entered the baseball clubhouse in the center of the little league fields at Sunset Park in Sturgeon Bay, you knew Hoot was there without him even saying a word, just by the aroma of his pipe tobacco being smoked. He introduced possibly more than 1,000 5th and 6th grade boys to the game of football. Those who played “Hooterball” (football) knew what a mastermind he was – with his three-back shotgun formations and creative play calling with his 4-Back Zippers, 42 Buck Laterals, and so many other classics. Many parents volunteered their time coaching various positions with Hoot’s teams, and he especially appreciated the comaraderie of his fellow football coach (initially 7th grade then later assistant varsity, both for Sturgeon Bay) and friend, Mike Taylor. And who could ever forget that belly laugh after he told a joke and laughed along with you; he lived to make you smile. Hoot probably even had you thinking you were $20 richer with his fake $20 bill.

He enjoyed hunting and fishing with his family. Hoot liked playing cards and eating chocolate chip cookies (actually, any kind of cookies). He was avid fan of the Green Bay Packers and Milwaukee Brewers and enjoyed attending as well as watching their games. Hoot bowled on the Bank of Sturgeon Bay team with friends and fellow baseball fanatics, Eddy Allen III and fellow baseball coach, George Husby. He liked visiting with friends – whether it was at the local diner or in his new home at King. The staff and residents there became a part of Hoot’s family.

He had a strong Catholic faith and was a member of St. Joseph Parish and a 4th degree member of the Knights of Columbus Msgr. Broens Council #2478, both in Sturgeon Bay. As a veteran, Hoot was a member of the local Marine Corps League Door Peninsula Detachment 1130. He helped to honor his fellow brother knights and Marines as a member of their respective honor guards at many funerals over the years.

In 2008, Hoot was inducted into the Green Bay Hall of Fame for Little League Coaches with the strong support and promotion by his sister, Faith Weix, and George Husby and Mike Taylor. Five years later, the football practice field he coached 5th and 6th grade football on was renamed “Hoot Field” in his honor. Sturgeon Bay mayor, Thad Birmingham, declared June 10 to be John “Hoot” Utnehmer day.

Hoot will be deeply missed by his two brothers-in-law and sister-in-law, Thomas Weix of Portage, Adrien Leiterman of Antigo, and Sue Utnehmer of Plover; nieces, Amy (Keith) Hall and Heidi Hauck who were like daughters to him as their families cared for him over the years, Julie (Bruce) Wichman, Nancy (Hank) Kakes, Leanne (Bill) Leiterman, and Gail (Mike) Bovet, nephews, Charles (Mikki) Utnehmer, Dan (Jan) Leiterman, Steve (Lori) Leiterman, Brian (Darnell) Leiterman, and Tony (Louis) Leiterman; several great-nieces and great-nephews; great-great-nieces and great-great-nephews; hundreds of former players and their families; and all of the staff and fellow residents at King.

Hoot’s life will be celebrated with a Mass of Christian Burial held at 4 pm on Friday, Jan. 12, 2018 at St. Joseph Catholic Church in Sturgeon Bay with Fr. Robert Stegmann and one of Hoot’s former players, Fr. Quinn Mann, concelebrating. Military Honors by the United States Marine Corps and the Marine Corps League Door Peninsula Detachment 1130 will follow at the church. He will be laid to rest near family in Queen of Peace Cemetery in Antigo.

Visitation for family and friends will be held at St. Joseph Catholic Church, Friday afternoon, January 12, 2018 from 2 – 3:50 pm.

THOSE PLANNING ON ATTENDING SERVICES FOR HOOT ARE INVITED TO WEAR THEIR FAVORITE SPORTS JERSEY IN HONOR OF HIS DEDICATION TO THE COMMUNITY THROUGH COACHING OVER THE YEARS.

Memorials may be given in Hoot’s honor for the Sturgeon Bay Cal Ripken Baseball, Sturgeon Bay Clippers Gridiron Club (for football), and the St. John Bosco School (in support of the school athletics).

While Hoot coached young athletes how to play the games of football, basketball, and baseball, perhaps the greatest lessons he taught were ones that his players apply to rest of rest of their lives: patience, kindness, respect, and to always try your best. He will be remembered for being a very humble man and always putting others’ needs before his own. Can’t you just imagine him being welcomed Home with the words, “Well done, my good and faithful servant.”?

“Our family would like to extend our heartfelt thanks to the entire staff and residents at the Wisconsin Veterans Home at King as well as the staff of ThedaCare At Home Hospice for the wonderful and compassionate care you gave to Hoot. Thank you also to all of you former players and your families for allowing Hoot to become a part of yours. We are truly grateful.”

Huehns Funeral Home & Cremation Services in Sturgeon Bay is caring for Hoot and his family. Expressions of sympathy, memories, and photos of Hoot may be shared with his family through his tribute page at www.huehnsfuneralhome.com.