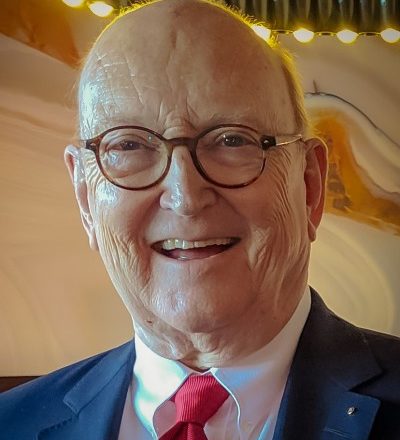 John Lawrence Dasher, 81, of Fountain Hills, Arizona, and Sturgeon Bay died in the loving arms of his family at Door County Medical Center in Sturgeon Bay.

He was born in Oskaloosa, Iowa, the son of Frank Leon Dasher Jr. and Agnes (Warder) Dasher. John graduated from Keota High School in 1955 and went on to study political science the University of Iowa in Iowa City, where he earned his bachelor’s degree in 1959. While at Iowa, he was a member of the Sigma Phi Epsilon fraternity, and through that, he met Linda Kay Stone. They were united in marriage on January 10, 1965, at Plymouth Congregational Church in Des Moines, Iowa.

Following his graduation from Iowa in 1959, John enrolled in culinary school at the City College of San Francisco in California.

He initially worked for Marshall Field’s, the University of Iowa Memorial Union food service and the Dayton Company. John and Linda moved to Waterloo, Iowa, and resided there until 1967, when they moved to Ames, Iowa. There, he became co-owner of a Mr. Steak restaurant with Bill Berger. In 1971, John became the owner/operator of McDonald’s restaurants in Iowa in Ames, Story City, Boone, Carroll and Nevada, which he owned for 40 years. He and Linda moved to Iowa City in 2014 and remained there until 2016, when they moved to Fountain Hills, Arizona. They became summertime residents of Sturgeon Bay in 2017.

John was a founding board member of the Iowa City Ronald McDonald House and served on the boards of the Ames Chamber of Commerce, Ames Economic Development Commission, and Gateway Hotel and Conference Center. John was named an honorary alumnus of Iowa State University in Ames. He was a member of the Order of the Knoll and chair of the Iowa State University Foundation. John was a member of the Ames Noon Rotary Club, for which he served as president and was District 6000 governor in 1992-93. He also served on the board of the United Way of Story County. He was an ombudsperson for the McDonalds Corporation and was on the Terrace Hill Commission and on the board of the Iowa Association of Business and Industry in Des Moines.

Above all, John loved his family and friends and valued service through work and volunteering. John was very beloved — one of the kindest you would ever meet — and a true gentleman.

A memorial service to honor his life will be held in Ames, Iowa, in spring 2020, with the date and details pending.

“Our family would like to express our heartfelt thanks to the staffs of Door County Medical Center and Unity Hospice for their compassionate care given to John and our family.”

Huehns Funeral Home and Door County Crematory in Sturgeon Bay are assisting the Dasher family. Expressions of sympathy, memories and photos of John can be shared through his tribute page at huehnsfuneralhome.com.