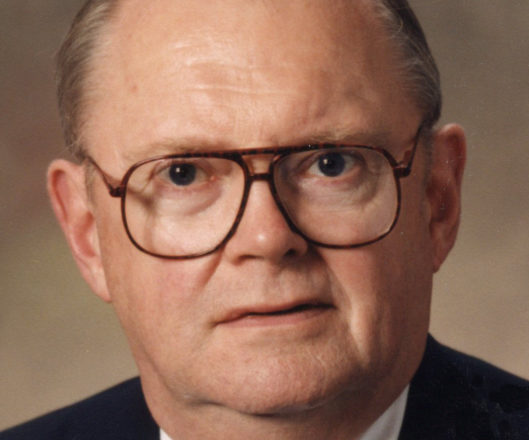 John N. Acker, 83, of Sturgeon Bay died peacefully in his home with his wife by his side. John was born to Norman J. and Eleanor A. Acker of Rockford, Illinois.

On February 13, 1959, he married the love of his life, Constance E. Dearth. They recently celebrated 60 wonderful years together. Not only was John a devoted husband, but he was also a loving father to his two sons and a beloved friend to many. To all who knew him, John was sincere, intelligent and compassionate, and he was loved and respected by his family and community.

After graduating from East High in Rockford, Illinois, John studied at the American Academy of Art in Chicago. His artistic talents fed his soul, and his engineering and design talents fed not only his family, but many others. It was these talents, coupled with his deep love for trains, and his desire to design intricate timetables for his many model railroads that inspired the concept for the SlideRail Square Transfer (SST®). His design, although created over 30 years ago, is still a leading solution in the industry today. He also holds two other patents in furnace design.

John worked for Seco-Warwick Corporation from 1964 to 1985, when he rose through the ranks from sales manager to executive vice president. In 1985, John was invited to join Therma-Tron-X (TTX) in Sturgeon Bay as president. He dedicated the next 33-plus years of his life to growing TTX into one of the most respected oven and finishing system designers and builders in the world.

Although trains were his favorite, John had many other interests and hobbies that kept him busier than most. Building, collecting and racing cars; tinkering with tractors and implements; and fixing and/or redesigning anything he touched that didn’t operate the way he thought it should are just some of the things that were important to John. He also found time to proudly serve his country in the Army National Guard. He earned a gold medal of honor from the Illinois National Guard for Outstanding Achievement in character, common sense, reliability, initiative and leadership.

No public services will be held. A private family graveside service and burial will take place on Friday, Aug. 23, at Woodlawn Cemetery in Creston, Illinois.