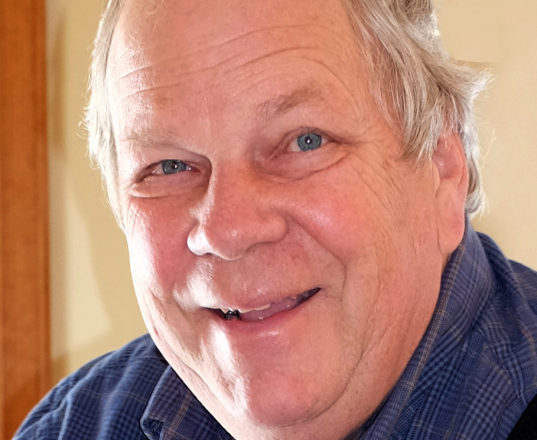 Being raised on the family farm provided adventures and diversions that later became wonderful stories that he shared with his children and grandchildren. Tales of putting his goat and cow to the harness, walking the fields to find his Pa after a nap at the age of four, and attending Waniger one-room schoolhouse down the road. Yes, he did walk in the snow, maybe not uphill, but both ways. Wallace and Eileen hosted family around the farmhouse table often, and John grew up with loving aunts and uncles, brothers and friends sharing meals and life together there.

John’s love of music started early, and he excelled as a trombone player, earning many awards and performance opportunities in high school. John decided to pursue music education at UW-Oshkosh and attended a year there before realizing that music instruction wasn’t for him. His love of brass instruments led him to Allied instrument repair school, where he earned a certificate in instrumental repair.

His love of music was a thread woven throughout his life. John was a founding member of The Bone Boys trombone ensemble and the Peninsula Symphonic Band, a pit member for Southern Door Musicals for over a decade, and readily shared his musical gifts in other ensembles and churches. Although trombone was his main instrument, John played baritone and trumpet, dabbled in piano, and had in recent years taken up cello.

Always interested in a musical performance, John attended a Sturgeon Bay High School musical in 1970 and saw his future wife, Georgene, on stage as Eliza in My Fair Lady. Having grown up with mutual family friends, John and Georgene were not strangers, but John reported “falling a little bit in love” after hearing her sing on stage. For Georgene’s part, she did remember John as the “goat boy,” as he had apparently shown off his “goat cart” to her and her siblings when they were children.

The couple married in 1973 at Friends Church in Sturgeon Bay and welcomed two children, Jason and Jennifer, in the following years. John’s love for Georgene was so evident to all those around them, and their marriage of 47 years a testament of that deep love and commitment.

John was a painter and owned his own business for 40 years. If you hired John to work for you, you could expect much more than “slapping paint on the walls,” in John’s words. He was a true creative, a craftsman who loved to restore and refinish and who had impeccable taste for color and an eye for the details of a project.

Always a patient teacher, John made sure his kids knew how to hold a paint brush, cut in correctly, and most importantly, how to clean up properly. Both kids spent summers employed by Dad and could attest to learning more than just painting on the job. John treated his customers like family and always did a little extra, teaching his kids the worth of a job well done and the importance of a nap right after lunch.

Being a dad was John’s joy, and becoming a grandpa expanded that joy six times. He was interested in everything his grandkids did and was thrilled to attend sporting events, concerts, dance recitals and school events because he didn’t want to miss any chance to support them and show how proud he was of them all.

Through all of his life, John’s relationship with Christ came first and was central to his being. Love, joy, peace, patience, kindness, goodness, faithfulness, gentleness and self-control – these fruits of the spirit shone through John to all those around him. This spirit flowed into how he led and raised his family and how he worked with and treated others throughout his life.

He is remembered for his gentle and caring nature, the twinkle of kindness in his eyes, and how generously he shared his time with those around him. Throughout life’s ups and downs, John lived rooted with an inward trust of his Savior, always centered in thanksgiving and wonder for all of God’s many good gifts.

John was preceded in death by his parents, Wallace and Eileen Mann; brother, Gerry Mann; father-in-law, Bob Warner; and many beloved aunts and uncles.

Private family services will be held at Friends Community Church, with Nancy Bontempo officiating. Burial will be in Schumacher Cemetery. A celebration of life will be held later in the spring. In lieu of flowers, a memorial fund has been established in John’s name at Nicolet National Bank.

John’s family would like to thank the DCMC’s COVID-19 unit staff and the Bellin COVID-19 ICU doctors and nurses who cared for John in his final days.