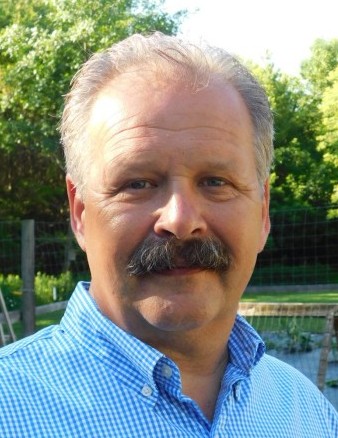 Joseph Charles Porten, 60, of Sturgeon Bay, died July 24, 2018 at his home surrounded by his loved ones. Joe faced his recent diagnosis of brain cancer with strength and grace giving his utmost concern to the wellbeing of his family and preparing them for continuing their lives after his death.

A longtime Door County businessman, Joe was known for his passion and integrity in business. In 1988, after attending University of Wisconsin-Stevens Point and working at several kitchen design businesses, he came to Sturgeon Bay to establish Cabinet Cove, a kitchen and bath design gallery. In 2007 he sold his business and went to work for Portside Builders as a remodeling design consultant, a position he held until the time of his death.

The son of Matthew “Chuck” and Jean (Follstad) Porten, he was born in Milwaukee on March 29, 1958. In 2001 he married Gretchen (Vogt) Clough and together they raised two children, Mariah and Callender. Joe and Gretchen moved from the city to “Firefly Farm” in the Town of Nasewaupee in 2011, becoming avid gardeners, hobby fruit growers, and birdwatching enthusiasts. The pair also enjoyed a love of travel which took them throughout the country.

Joe was known to many throughout the country for his duck hunting passion, work to preserve waterfowl habitat, love of ice fishing, and his woodworking talents. He was a former board member of Wisconsin Waterfowl Association, former member of Ducks Unlimited, and former Chairman of the Wisconsin Waterfowler Hunters’ Conference. His walleye caught through the ice were a fabulous winter treat and there were many ecstatic recipients of his beautiful woodworking projects: duck calls, peppermills, and bottle toppers.

Joe was an integral part of the community frequently volunteering his time to numerous organizations. He served as president of the Door County Home Builders’ Association, was a member of the City of Sturgeon Bay planning committee, participated in the DCEDC School build project, and served his church, Holy Name of Mary Catholic Church in Maplewood.

Though busy with a demanding work load and volunteering, Joe made one of the priorities in his life to spend time with family, extended family, and grandchildren.

In addition to his wife, Gretchen, Joe is survived by children, Mariah Clough (Kurt) Schoonover of Oak Grove, MN [and their children Weston and Harper], Callender Clough of Grand Rapids, MN, and Wade Tatro of Antigo, WI. He is further survived by his mother, Jean Porten; brothers, Robert (Missy) Porten, John (Stacy) Porten, and David (Bev) Porten, and sisters, Bonny (Larry) Duder and Jenny (John) Moilanen; and many other family members.

He is preceded in death by his father, Chuck; and his grandparents.

Joe’s life will be honored with a Mass of Christian Burial celebrated at 11:00 a.m. on Wednesday, August 1, 2018 at Holy Name of Mary Catholic Church in Maplewood with Fr. Carl Schmitt as celebrant.

Visitation for family and friends will be held at the church on Wednesday morning from 9:30 a.m. until the time of Mass.

Special thanks to Unity Hospice for their excellent and compassionate care and Dr. Phil Yazbak.

Huehns Funeral Home, Inc. & Door County Crematory in Sturgeon Bay are assisting the family with arrangements. Expressions of sympathy, memories, and photos of Joseph may be shared with his family through his tribute page at www.huehnsfuneralhome.com.