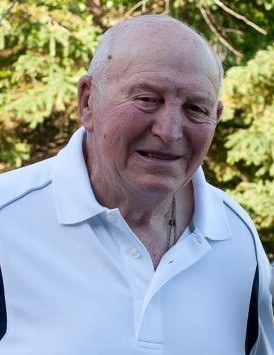 Joseph Fredrick Felhofer, 85, of the Town of Sevastopol, died on Friday, August 13, 2021, surrounded by his family.

He was born October 14, 1935 in Germantown, son of the late Joseph Peter and Francis (Mosgaller) Felhofer. Joe was raised on their family farm in Sevastopol and attended Sevastopol School District. On July 19th, 1958, he married the love of his life, Beverly Ann Metzger, at St. Boniface Catholic Church in Manitowoc. They were members of SS Peter and Paul Catholic Church in Institute. The two spent 60 years together before she preceded him in death on September 12, 2018. Joe was employed through the Door County Highway Department of 39 years until his retirement in 1998. He enjoyed fishing, hunting, gardening, baseball, playing cards (specifically, sheepshead) and dart ball, watching the Green Bay Packers, and listening to Polka music.

Joe’s life will be honored with a Mass of Christian Burial on Thursday, August 19, 2021 at 11:00 a.m. at SS Peter & Paul Catholic Church in Institute. He will be laid to rest in the church cemetery beside his wife and daughter.

Visitation for family and friends will be held at Huehns Funeral Home on Wednesday, August 18, 2021 from 4:00 p.m. until the time of the Parish Wake Service at 7:00 p.m. Visitation will continue on Thursday morning at the church beginning at 9:30 a.m.

Joe’s family wishes to extend a thank you to the staff at Algoma Long Term Care for their loving kindness shown to Joe and the entire family over the past year.

Expressions of sympathy, memories, and photos of Joe may be shared with his family through his tribute page at www.huehnsfuneralhome.com.